Lincoln-Way D210 – Emergency before our eyes!

Lincoln-Way D210 is facing an immediate emergency!  Please someone, anyone, get over to that school and take their shovel away as they are going to bury themselves alive at this pace.  Oh, wait, that actually may cure some of these events that frankly should be set up for prime-time comedy hour as most ordinary people can't believe it's happening.

This district is plagued with the most unusual pattern of deception, corruption, lies, stupidity, and a complete lack of understanding of our laws and how they apply, not to mention zero common sense.

For perspective, let's look at this short list of things we have covered.

OK,  I think you get the point on the history of stupidity coming out of this particular school district.  If those listed above don't sway your opinion, select from the many more not on that list that can be found at this link.

So what inspired yet another article on a school district already facing FBI and Securities and Exchange Commission investigations?

Yes, a sign regarding the use of a bathroom at Lincoln-Way D210 was more than enough for a call to action as clearly the stupidity has hit a level that justifies calling this an emergency!  Each and every citizen in that district should attend the next board meeting and give them a piece of their mind, assuming you are under the impression that the taxes you pay for your kids to attend this school includes the liberty to use the bathroom of their choosing.

Someone has placed a sign on the wall that restricts the taxpayer-funded bathroom, built for students, faculty, and staff, from being used by those it was designed for. In fact, the restriction outlines that it may only be used for the rent-dodging private business that is being subsidized on the backs of the taxpayers.  Yes, just when you thought using tax dollars to train dogs instead of children was as bad as it could get, now they can't even relieve themselves in the bathroom of their choosing, even though it was built for them with tax dollars of property owners in the district.

You really can't make this stuff up! 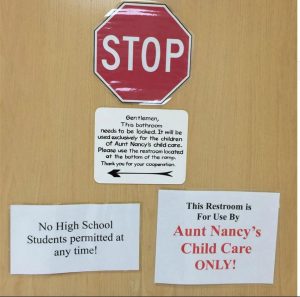