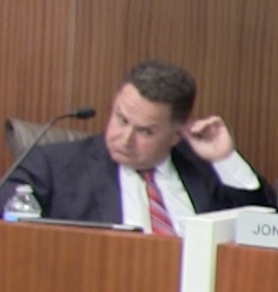 Keen observers of Open Meetings Act violations committed in recent years have pieced together a concerning pattern where Klein Thorpe Jenkins, as a firm, often appears to be present when the OMA is being aggressively violated by a public body. When multiple attorneys from the same law firm continue to represent clients who violate the OMA in the same exact ways, it appears that violating the OMA is something this firm either strategically endorses or their advice is continually ignored by rogue public officials. If their advice is ignored, we suggest they decline representing such a public body.

Klein Thorpe Jenkins first came onto many people’s radars as a law firm back in October 2013 when attorney James W. Fessler infamously attacked a mom who had come before her local public library board to voice concerns about staffers allowing men to engage in sexual activity in the Orland Park Public Library’s computer area. Fessler took charge of the meeting, and viciously attacked the mom, told her that she had no right to demand answers from the Library and essentially caused the library board to violate the OMA in a half dozen creative ways. Fessler demanded that anyone wishing to speak first write down their addresses; he admonished and bullied the public and repeatedly interrupted and heckled speakers (when at no time did he legally have the floor during public comment); and he even at one point implied complete ignorance of the First Amendment right to petition government bodies for redress of grievances. His caustic and unbalanced tantrum during that October 2013 Orland Park Public Library board meeting went viral on YouTube and social media; to retaliate against the public for his being embarrassed, Fessler then made (we allege they were false) police reports against members of the public who spoke at the board meeting. His behavior and legal advice to the Orland Park Public Library eventually culminated in both the Library and the Village of Orland Park having to pay a combined $67,000.00 in damages related to FOIA and OMA violations and abuse of the public’s civil rights. At some point not long after the settlement was paid, Fessler (a partner) disappeared from Klein Thorpe Jenkins’ website roster of attorneys and resurfaced a short while later working for some kind of soap company out in Bedford Heights.

Like Fessler, E-Kenneth Friker was another KTJ partner who embarrassed himself during Orland Park Public Library board meetings. Friker (whose real name is “Eugene”), replaced Fessler at board meetings after video surfaced of Fessler’s bizarre attack on a local mom. During one memorable event at the OPPL, Friker asserted that the Library could control when the public could and could not film in the public building by trying to prevent the public from filming before the gavel was banged officially starting a meeting; he wanted all cameras turned off immediately when the meeting was over (but a majority of a quorum of board members were still milling about in the room, having conversations of interest to the public). OPPL board members and staffers such as the Library’s disgraced former spokesman Bridget Bittman routinely made inflammatory remarks or took aggressive negative actions towards the public immediately prior to the meetings or after the meetings. Friker and the OPPL lost on this issue, as no public official has any right to privacy in a public meeting room inside a public building while either waiting for a public meeting to begin or while the room is clearing out after the meeting has ended.

The Klein Thorpe Jenkins attorney with the worst record for OMA violations (in Orland Park at least) has to be Dennis Walsh. This man aggressively asserted that the OPPL could hold an illegal special meeting and ban the public from speaking on Abraham Lincoln’s Birthday. We believe he lied to the Chicago Tribune by telling reporters that Abraham Lincoln’s Birthday was not a legal holiday in Illinois, despite all government offices being closed that day. The OPPL called a surprise special meeting on this day with no proper notice to the public in order to vote to continue allowing child pornography to be accessible on the Library’s computers…and Walsh banned the public from speaking during this illegal meeting by claiming that public comment was not required at a special meeting. In a series of determinations by the Attorney General’s office, the OPPL was forced to void its votes taken at both the illegal Abraham Lincoln’s Birthday meeting and also subsequent meetings where Walsh apparently advised the OPPL to illegally vote to “affirm” the illegal actions they took at the previous illegal meeting. Instead of holding a new vote on whether or not to continue allowing the child pornography to be accessible on their computers and reciting the issue properly for the public, Walsh allegedly told the OPPL that they could just have a quick vote to “affirm” what they did illegally and “cure” its illegality in that way. The Attorney General didn’t buy it and made the OPPL take a whole new vote. Walsh was also their attorney when the OPPL thought they could censor the topic of the public’s comments during the public comment portion of the meetings.

In Tinley Park, KTJ attorney Thomas Melody was counsel when Tinley Park was sued by a citizens’ group for his role in tampering with a Village zoning ordinance so that an out-of-state developer could slip in under the radar and build a project that did not meet the Village’s strict “street level commercial space” requirement for new construction near Tinley Park’s downtown. During board meetings attended by citizens angry about the zoning code tampering, Melody attempted to interfere with public comment and, like Walsh, restrict what people could speak about. He was loudly shouted down by engaged and informed citizens who knew their rights. Melody was their attorney when the Village held meetings in violation of the OMA, due to the inability to accommodate everyone who wanted to participate in the meetings. The Village racked up numerous OMA complaints that went before the Attorney General, who determined that the Village indeed violated the OMA time and again. Ultimately, the Village of Tinley Park admitted that the tampering done to the Village zoning code was illegal when it settled the lawsuit filed by the citizens group; Thomas Melody and KTJ were also terminated as the Village’s attorney and replaced with a firm committed to giving the Village only sound and accurate legal advice.