It is with total amazement that I see people willing to blindly defend and follow a person, when in reality they know very little to nothing about the real person, other than what they learned from sitting at the bar stool.

A pattern of behavior in a person’s life is key in vetting a candidate, and that pattern more often than not does in fact paint the real picture of what a person’s principles are.I believe, regardless of party affiliation, the basic principles of integrity, honesty, trust, morality, are universal when it comes to people’s expectations from their elected officials.

A recent letter to the editor from Robert Webb of Ashmore (Click Here), spells out some things better than I could ever put to paper and I wish that letter could be sent to every mail box in this country for everyone to read.  Since its publication, of the many who have read it and I spoke with, I have yet to find one person who disagreed with what it said.  (Click here for a PDF Version of the letter)

Is asking for that character trait asking too much in today’s political environment?

Darrel Cox, current Sheriff for Coles County and candidate for State Representative in the 110th said he got into law enforcement because, and I quote:

“I wanted to be the Knight in Shining Armor”

Mr. Cox’s employment application reflected that he is a social drinker.  Not sure how that was defined back then but most locals know Mr. Cox’s drinking history and it was his drinking habit that lead to his lying under oath covered in a past article about his character. (Click here for past article).

Looking at this laundry list of clear and distinct patterns of behavior does anyone think for a second Darrel Cox reflects the character of the “Knight in Shining Armor” ?

Conspired with co-workers to lie and cover-up his actions

Lies about balancing his budget 6 of the last 7 years

Refuses to disclose his own discipline file

So here we are again today with even more exposure of questionable behavior coming out of Darrel Cox and his current office.  If you expect anything to get fixed we have to stop sending incompetent and unprincipled people to Springfield.

I submitted a FOIA for a cassette tape that was part of a public record, under the custody of his office, and was used as evidence in his hearing for termination. What is important to keep in mind is the fact that a records destruction authorization found here, here and here, which was provided from the State of Illinois, DOES NOT authorize the destruction of the cassette tape I asked for.  Why do I want the actual tape?  Because his own voice paints the picture of his condition when he called in sick, which court records reflect he was in fact drinking.  That makes his words about just getting up and being sick a blatant lie and this was proven in court.

His office now claims they have no cassette tape in their possession. (Click here for the response)

With no authorization to dispose of that public record, why is it not in their possession anymore?  Did Mr. Cox ensure it was destroyed because of how bad it sounded when he made that call?

This is the trascript of the recorded phone conversation. – JC is John Clough (More on him soon as he is running for Sheriff now) and DC is Darrel Cox:

JC: This is John

DC: John, this is Darrel

DC: Uh, I got up – feel like I’m going to be sick tonight for sure.

DC: So, I think it’s just me and Hale so you’ll probably have to have someone to stay over or call someone in early.

DC: All right. Thanks

What jumped out at me, having dealt with more than a few drunken airmen trying to call in sick during my time in the service, was that very first introduction on the phone where Darrel lets them know it’s him on the phone, then after he already told them who it was he told them again.  That is known as an indicator of condition in the circles of those that know what to look for when it comes to drinking behavioral signs.

As the record has proven in this case, he was in fact drinking as well as lying through his teeth when he called in sick. He was no more sick than I am typing this article…….uh, wait, actually it does make me sick to have to type this!

The point with this is yet another FOIA was submitted that resulted in more records not being provided and in this case a claim they don’t have them even though they are required to keep such records.

Pathological liar? – “falsification entirely disproportionate to any discernible end in view, may be extensive and very complicated, and may manifest over a period of years or even a lifetime”.

All indications are that lying is no problem for Mr. Cox, to include doing so under oath or when alone on the phone. The pattern of behavior in his career with the Sheriff’s office is what we have to look at to know what we would get, and it’s so clear even a fool can see it.  Darrel Cox lacks the integrity we need for our elected officials and he has no business even serving the public with this kind of track record.

Vote with your brains people, not your emotions!

For more coverage and hard vetting of the Candidates for the 110th District visit this link to see every article written for this seat: 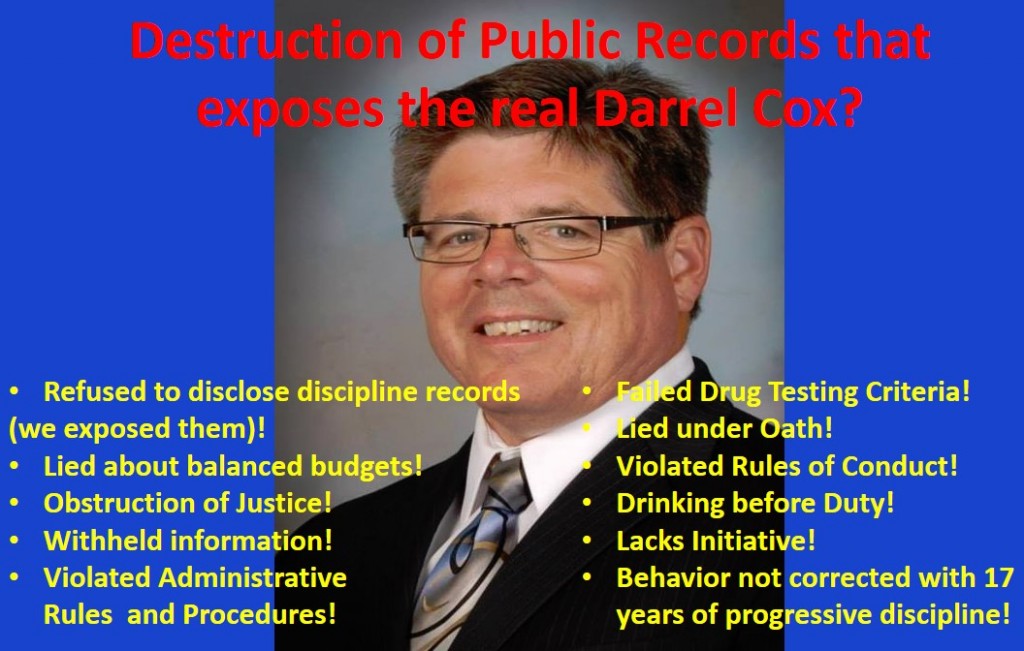