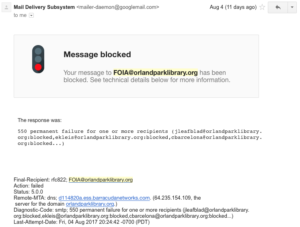 The Orland Park Public Library apparently manipulated its email server somehow to block a recent Freedom of Information Act request from this author, made on August 4th, 2017 for documents related to what appears to be possible violations of the Illinois Local Government Travel Expense Control Act (50 ILCS 150).

On that date earlier this month, FOIA requests made to the OPPL via email to the public body’s FOIA compliance officer Mary Adamowski and its Board Members were blocked, with a message returned from the Library’s server stating: Message blocked. Your message to [email protected] has been blocked. See technical details below for more information.

In total, the August 4th, 2017, FOIA request that was emailed to Adamowski as well as OPPL Trustees Joanna Leafblad, Elan Kleis, Christian Barcelona, Dan McMillan, and Nancy Wendt Healy was blocked, with the Google Mail delivery subsystem indicating that the BarracudaNetworks.com server for the domain “orlandpark.org” had rejected receipt of the FOIA request. A separate “Message Blocked” email was received from the Library’s server for each email address that was sent the August 4th FOIA request. Seven such “Message Blocked” notifications were received.

This request sought further information into the suspicious spending engaged in by OPPL Director Mary Weimar and the OPPL’s refusal to produce an itemized receipt to support her recent purchases with the Library’s Visa card. The blocked email also contained a letter to the OPPL Board of Trustees, petitioning the Board to involve itself in this matter to ensure that the OPPL complied with its written policies when it came to employees producing receipts to support their reimbursement requests.

It should be noted that the Village of Orland Park and the Orland Park Public Library are separate public bodies but retain the same law firm, Klein Thorpe Jenkins. Through the years, tactics employed by the Village of Orland Park have been suspiciously similar in this author’s opinion to tactics employed by the Orland Park Public Library when it comes to hiding documents, stalling production of documents, refusing to comply with FOIA requests, hassling the public, etc. These similarities in negative or hostile behavior towards the public are very possibly due to the same attorneys from Klein Thorpe Jenkins advising both the Village and the Library. In this author’s view, the Klein Thorpe Jenkins law firm seems to operate with a mindset that facilitates what a public body wants to do instead of preventing that public body from doing something that is wrong or violates the public’s rights in some way. The 2016 book SHUT UP!: The Bizarre War that One Public Library Waged Against the First Amendment is chock full of examples of Klein Thorpe Jenkins attorneys encouraging or facilitating an aggressively negative stance against the public and in hindrance of transparency, as opposed to intervening on the side of the public and preventing a public body from violating the law and doing things it arguably should never be doing to the public.

The Attorney General’s Office of the Public Access Counselor was informed of the Orland Park Public Library’s apparent email blocking via a Request for Review filed on August 4th, shortly after the OPPL’s server sent the notification that the FOIA request was blocked.

Assistant Attorney General Neil P. Olson received the Request for Review and questioned the OPPL about this matter on August 11th, writing to them: Mr. DuJan alleges that an e-mail he sent on August 4, 2017, with an FOIA request was blocked by the library (see attached).  Could you please advise me why Mr. DuJan’s e-mail address appears to be blocked, and remedy the situation as necessary.  Please also respond to Mr. DuJan’s FOIA request in accordance with section 3 of FOIA.

In this instance, the OPPL appears to have chosen to not fight the AG’s office and they responded to the August 4th FOIA request on August 14th, 2017, (five business days from the first business day (a Monday) after the OPPL’s server received the blocked email containing the FOIA that was sent to them on Friday, August 4th).

If the OPPL hadn’t responded on or by August 14th, that public body would have been in violation of our state’s FOIA statute. In this author’s experience, it appears to be standard operating procedure for the OPPL to insist on extensions for almost all FOIA production, so their response coming so soon after Assistant AG Olson’s inquiry about the email blocking was unusual for them.

This episode underscores a good rule of thumb when dealing with a public body whom an FOIA requester believes is doing something it is not allowed to do under the FOIA statute: immediately either contact the PAC’s office and ask for their help in mediating the situation or hire a lawyer to sue the public body in court, especially if that public body is doing anything that results in emailed FOIA requests being blocked by the public body’s server.

No public body is allowed to block FOIA requests. The OPPL’s lightning quick actions after receiving the Assistant AG’s direction to comply shows that even the most recalcitrant public body will often heed the AG’s office when direct instructions like that are issued to them by the PAC.
.