For several weeks now, the Orland Park Public Library has been refusing to produce a receipt showing what was ordered and how many people ate (or drank) at a Chicago Chinatown restaurant named Lao Sze Chuan. The Library’s story is that its Director, Mary Weimar, either lost the receipt or was never given a receipt. The Attorney General’s Office of the Public Access Counselor (PAC) was asked to intervene and mediate this dispute; in doing so, Supervising Attorney Joshua Jones made a series of phone calls to the OPPL and stated that he directly asked both Mary Weimar and OPPL FOIA Compliance Officer Mary Adamowski if they would resolve this matter by authorizing Lao Sze Chuan to reprint the check for the $96.50 credit card charge that Weimar admitted to the PAC she made on June 23rd, 2017.

It appears that our state’s FOIA statute is flawed in that it presumes that public bodies will be truthful when it comes to obtaining and preserving receipts that itemize their restaurant spending, even if “losing” those receipts (on purpose?) means public employees can use this loophole to hide improper spending from the public.

As a result of this impasse, the public to this day doesn’t know how many people were involved in spending that $96.50 in taxpayer funds on June 23rd or if alcohol was purchased by Library employees. 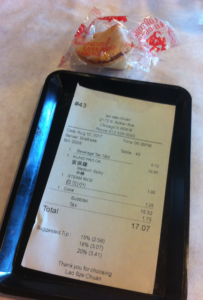 To obtain firsthand knowledge of the receipt-issuing practices of this restaurant and its costs for dinner, a fact-finding trip was made to Lao Sze Chuan (at this author’s expense) on August 10th, 2017. After reviewing the enormous menu (a thick, heavy, red, printed book that went on forever) and ordering dinner for one (Kung Pao chicken, steamed rice, and a Coke), the waitress ultimately brought to the table a check for $17.07 on a small black plastic tray adorned with a fortune cookie.

Even though the Kung Pao chicken was more expensive at Lao Sze Chuan ($12.95 + $1.00 for rice = $13.95 for an entree) than the same menu item would be at other Chinese restaurants in Chinatown (whose posted menus on their windows showed this dish selling for $9.95, with free rice), it seemed impossible for one person to rack up a $96.50 bill when dining alone and not ordering alcohol. Since the meal was so filling, it would have been difficult to have ordered more food for just one dinner and still been able to finish it all.

The experiment solidified this author’s speculation that Mary Weimar either could not have been alone or she possibly ordered alcohol while at Lao Sze Chuan. Since the OPPL refuses to have her actual check reproduced, the public is forced to imagine what she ordered that night. The credit card authorization form that Weimar completed for this purchase listed no other names identifying anyone else joining her. 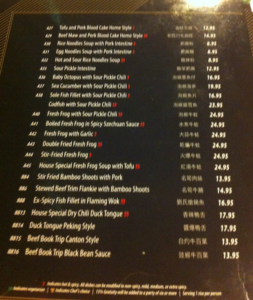 Lao Sze Chuan’s menu ranges from $12.95 basic entrees like the Kung Pao Chicken to fantastically elaborate concoctions like Double Fried Fresh Frog ($24.95), Duck Tongue Peking Style ($17.95), Sea Cucumber with Sour Pickle Chile ($19.95), and Diced Whole Fish Casserole Soup ($20.95). Lao Sze Chuan is apparently the place to go for anyone who likes to eat frogs, as there seems to be more frog dishes on this menu than anywhere else in Chicagoland (and all of them are $24.95 or higher, presumably due to the difficulty in obtaining fresh frog meat here).

Without alcohol, Mary Weimar could have conceivably created a $96.50 restaurant charge by ordering an appetizer of House Special Fresh Frog Soup with Tofu ($24.95), an entree of Fresh Frog with Garlic ($24.95), and finally Boiled Fresh Frog in Spicy Szechuan Sauce ($24.95) for dessert. Such an order would have come to $74.85 before tax; with Weimar’s overly generous 20%+ tip, this author supposes that it is possible that this could have been what she ordered on June 23rd that resulted in a final credit card charge of $96.50 at this restaurant. But it all seems like far too much frog for one woman to consume in a single sitting (if not a lifetime). 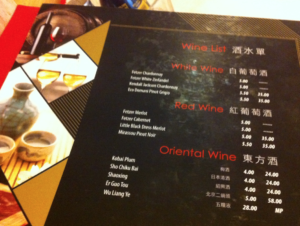 However, a review of Lao Sze Chuan’s wine list makes it easier to see how a $96.50 charge could have been made with only one person eating and drinking. If Weimar had ordered the Kung Pao Chicken (with steamed rice) for $13.95 and washed it down with a full bottle of $58.00 Er Guo Tou “oriental wine” (as the menu described it), her check would have apparently been $71.95 before tax. Another combination could have involved a more expensive dinner with a less expensive bottle of wine, such as the Kendall Jackson chardonnay or the Eco Domani pinot grigio (both listed at $35.00 a piece). Similarly, Pork Intestine and Pork Blood Cake ($13.95) and Pig Ear Szechuan Style ($6.45) paired with House Special Dry Chili Duck Tongue ($17.95) and a bottle of $35 white wine would have resulted in a pre-tax total of $73.35. But again that seems like far too much food for one person. This author believes that the only way one person dining alone can conceivably walk out of Lao Sze Chuan after spending a total of $96.50 is if a whole bottle of alcohol was ordered with her meal. 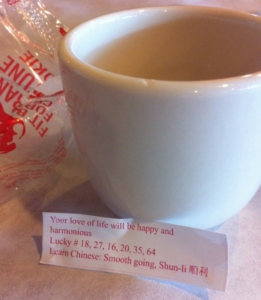 The Orland Park Public Library’s own policies, as well as the Illinois Local Government Travel Expense Control Act, appear to both require identification of the names and job titles of all public officials who expect the public to pay for their food or drink when traveling. For her Lao Sze Chuan spending spree on June 23rd in Chicago, Weimar wrote nothing in her required reimbursement paperwork indicating that there was anyone else at the table besides her. The OPPL at first redacted Weimar’s own name from the document and was forced to identify the blacked-out redaction as “Mary Weimar” only after the PAC became involved when the excessive redactions were questioned.

If this meal really was a legitimate business expense, why is the OPPL still hiding the names of all who attended and what they each ordered? Unless Mary Weimar really was alone at the table, in which case it is a matter of public interest how she ran up that big of a bill if she didn’t in fact order alcohol.
.