Clark Co., IL. (ECWd) –
The Marshall Advocate has misquoted me again, which is nothing new and not surprising, but worth pointing out.
During the October 15, 2015 Clark County Park District Board of Commissioners meeting, there was a section devoted to public comment as required by law.
Warren LeFever spoke first, and when he initially tried asking a question of the Board as part of his exercising his statutory right to speak, Chairman Joe Ewing, the one who cheated and used forged petitions to be place on the ballot and still laughs at all the Clark County voters because he has not been held accountable…yet…, thought violating the public trust in elections wasn’t good enough, so he kicked it up a notch. This time, he decided to try and violate LeFever’s  statutory and civil rights to address the Board. Eewing was quickly reminded that questions were also part of speech.
Another person spoke, then I spoke, informing the Board that the statute (Park District Code) did not allow the park district to pay for membership in the Chamber of Commerce.
The Marshall Advocate, being the type of paper they are, misquoted me and made it sound like I said they couldn’t be members because they were a government entity. That is not what I told the board. 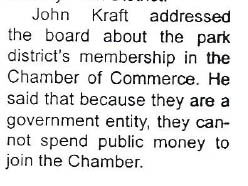 This is what the Marshall Advocate thinks I said…

You can watch the meeting video and hear it for yourself at the 5:38 mark:
What I actually said: