Local gadfly John Norton, filed for an Emergency Order of Protection this morning demanding that the ECWd, Kraft and Allen, be prohibited from attending court hearings unless we were named in the case.

The Court pronounced the Motion was STRICKEN from the record.

Of course, Norton misrepresented the Truth to the Court again, by making statements in this Motion and signing his name, under penalty of perjury, that everything was true.

In his Motion for Emergency Protective Order, Norton claimed the following:

Apparently Norton is confused as to what he sees going on around him.

There was no attempt made to "harass, intimidate or provoke" a response or anything else. We are simply the Press attending a Court Hearing in which we are interested in writing about. It is always interesting to write about people who continually misrepresent the truth to the Court, change their stories and statements from one court case to the next, and file frivolous lawsuits and motions. The public has a right to know, and we have a right and responsibility to report.

One final item needs to be mentioned here:

In an unrelated court case, Norton claimed a certain Facebook page was his intellectual property. Well, we snipped a post and compared it to photos of him leaving the courthouse this week.

Click on the pic to enlarge it (the text at the bottom talks about winning a Darwin award and removing themselves from the gene pool): 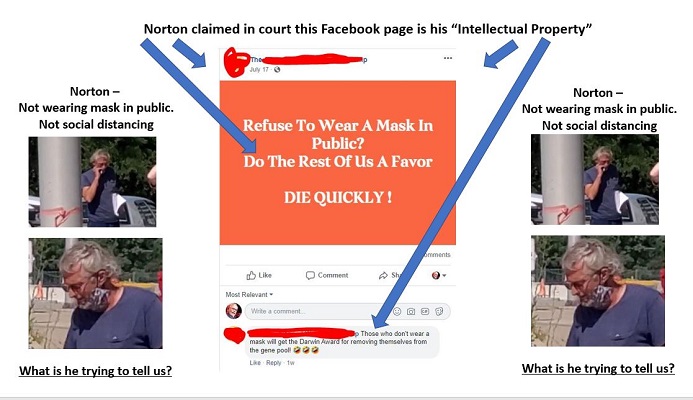