While we recognize the need to take appropriate measures related to the Covid-19 situation, we must also recognize the importance of our laws and the fact an emergency does not negate the City's obligation to follow our laws, both State and Federal.

After the City of Champaign recieved national attention with their emergency declaration yesterday, it appears the citizen pushback is having an impact.

In an attempt to "clarify" the city's actions, they issued a press release that is clearly misleading and conveniently written, much like a piece of propaganda.

The opening paragraph claims their response is based on several false claims circulating online.  While we have seen some false claims of firearm seizure power rather than the ban of firearm sales outlined in the ordinance, note the language used by the city as it relates to seizing of property and closing businesses.

"no intent to seize property or close businesses"

If there is no intent to seize property or close business why are those very provisions found in the approved ordinance?

Sadly, those very items trample on people's Constitutionally protected rights.  We suspect any attempt to exercise those items will result in a hefty legal battle that will cost the taxpayers dearly.  An emergency does not overrule a person's due process rights nor does it give the government the right to take possession of their property or acquire full title.

The second paragraph contains a clear attempt to tamp down the reality of what was included in their ordinance by basically lying to the public.

"The ordinance passed this morning by the City Council authorized the following emergency powers."

They claimed they have the following power:

The very first item they claim to have the power to do is NOT a listed power in the Ordinance, nor does the Open Meetings Act provide a mechanism for them to hold a meeting electronically as they claim.

2.01 - "A quorum of members of a public body must be physically present at the location of an open meeting."

2.02  - "(b) Public notice shall be given by posting a copy of the notice at the principal office of the body holding the meeting or, if no such office exists, at the building in which the meeting is to be held.

"Notice of an emergency meeting shall be given as soon as practicable, but in any event prior to the holding of such meeting, to any news medium which has filed an annual request for notice under subsection (b) of this Section."

The law does not provide for public input "if practical".  In fact, it requires the municipality to provide the public with an opportunity to address public officials.

2.06 - (g) Any person shall be permitted an opportunity to address public officials under the rules established and recorded by the public body.

While the city listed 11 claimed powers, only 10 of those listed are actually in the ordinance.  Considering the actual ordinance has thirty items listed, their claim clearly misinforms the public.  The full list of emergency powers they "think" they possess can be viewed at this link.  Remember, just because a public body adopts an ordinance it does not mean its legal. We have seen many adopted rules and ordinances that violated law but were simply never challenged.

Most telling is the fact they avoided listing the most offensive alleged powers in what appears to be their attempt to tamp down the pushback they are receiving.

Saving the best for last, read the last paragraph!

"The Mayor has the authority to exercise other emergency powers under the Champaign Municipal code section 12-39, which have been in existence since 2006; however, and under the known circumstances, no further measures are anticipated."

A clear example of why people need to wake up and start attending meetings and paying attention to what their officials are doing is the fact this very ordinance of alleged powers has been in existence since 2006 according to their clarifying statement. Had people been paying attention on a regular basis the outrage we are seeing now would have been exposed 14 years ago.

The very last item is proof the claim of them having no intent to do certain things is false.

If no further measures are anticipated, then it is clear they anticipate exercising the other emergency powers they conveniently did not list. 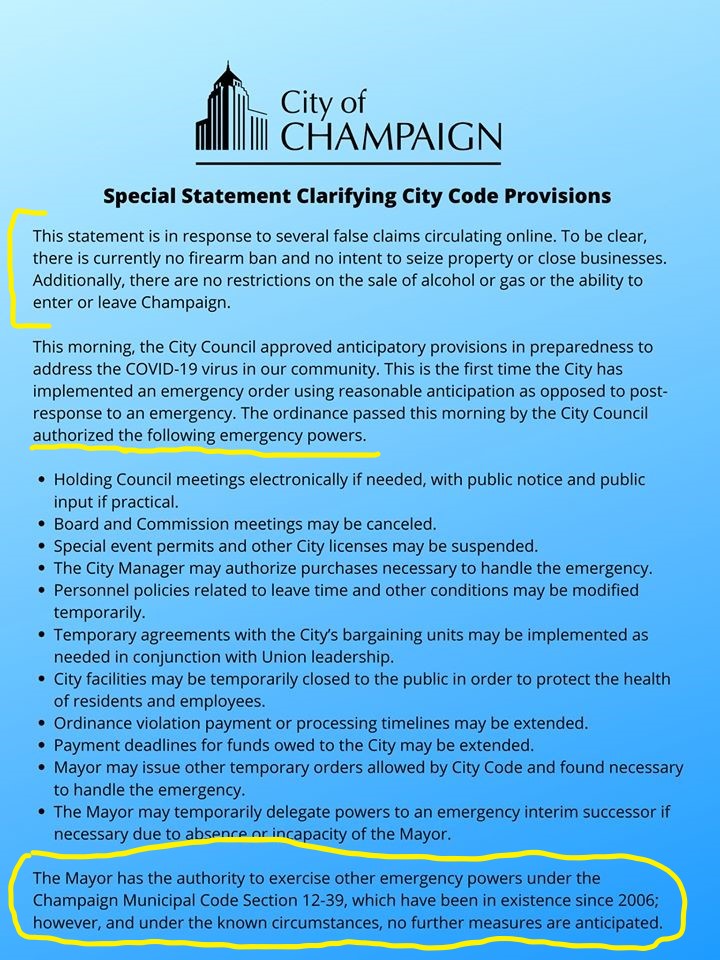