After our previous article on the City of Mattoon’s alleged illegal appointment of an employee of the Mattoon School District to a vacant Coles County Airport Authority Commissioner’s seat, I sent an email to the Mayor and the city attorney pointing them to a recent AG opinion and asking them to let me know what they were going to do with the alleged illegal appointment.

I responded the same day, again asking them to reconsider and pointed to the last sentence of the paragraph they read in their determination, which reads:

“. . ., except when the authority is wholly within a single county with a population of less than 40,000, an individual employed by a local school district may serve as commissioner.“

I reminded them of Dillon’s Rule (units of local government only have those powers granted to them by the Legislature), and how when a statute specifically authorizes one thing, it (by default) excludes all others. For instance, if an airport authority was located in more than one county, an individual employed by a school district is prohibited from serving as commissioner – no matter what the population, likewise for an airport authority located in a county with a population greater than 40,000 (like Coles County) – an individual is prohibited from serving as a commissioner.

Again, that same day, I emailed a link to the Senate Floor Debate (see page 213) on the Bill which added the last sentence as quoted above. The Courts and the AG sometimes use these Floor Debates to determine the Legislative intent of a statute.

In the debate, it was made clear that school district employees were currently prohibited from serving as commissioners, and that the Bill was introduced because the Mayor of Mount Vernon, Illinois thought he had difficulty finding people to serve as airport authority commissioners. In response to the Mayor, this Bill was introduced to make it easier to find potential commissioners in small counties. The Legislature placed the cut-off at less than 40,000 population.

By providing for this specific exception, the Legislature meant to exclude all others from serving as commissioners.

During the Mattoon City Council meeting this week, the city attorney (see the below video at approx. the 55:13 mark) provided an explanation on the appointment by basically reciting what he earlier sent me in his email – failing to even consider or read the last sentence of the paragraph he was quoting from in the statute.

He was asked about that sentence and made excuses as to why he didn’t read it.

We believe the city thinks it can simply buy time until the appointed commissioner retires from the school district at the end of May 2020, however, his appointment would still be invalid since he was appointed when he was statutorily prohibited from serving, nullifying that appointment.

In short, how can the city rely on an opinion that did not even take into consideration the last sentence of the paragraph quoted, which would prove the legal advice to be inaccurate?

This problem will not go away. 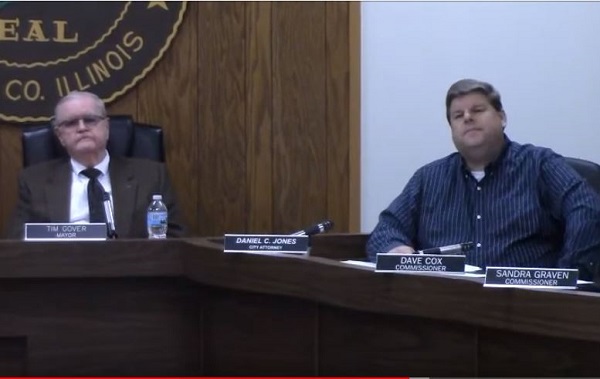