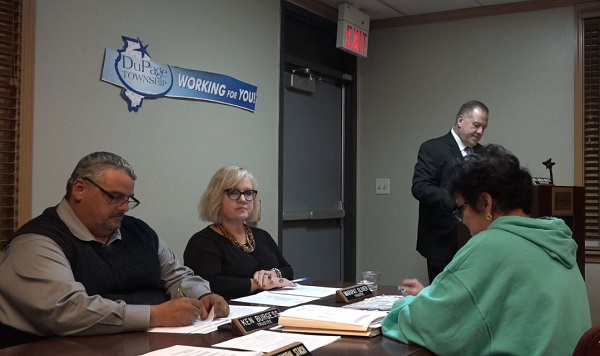 DuPage Township Supervisor Mayer violates the first three of the "Four Pillars of the Rule of Law" during the October 23d DuPage Township Board of Trustees meeting.

What are the Four Pillars of the Rule of Law?

During this particular meeting, the DuPage Township Board of Trustees voted in favor of a new public comment policy, which in our opinion violated the Open Meetings Act and the First Amendment. We covered those alleged violations in a previous article (here).

When creating a new law, which is what an Ordinance essentially is at the local level, the public has a right to know that the law is actually in effect, that the law will be applied to everyone, and that enforcement of the law is fair.

In this meeting, Supervisor Mayer read the Ordinance in its entirety, well, almost. He left out the part that the Ordinance would immediately take effect - so the citizens had no idea the Ordinance was in effect and could not possibly comply with a new law they did not know about.

Supervisor Mayer did not inform anyone the new rules would be enforced until the meeting reached the point to where he did not like what I was talking about during public comment time. It was then when he became defensive towards my speech that he arbitrarily decided to enforce the new rules, which I objected to, which resulted in him directing the Bolingbrook police officer to remove me from the meeting.

Additionally, Mayer arbitrarily enforced the new rules, but only against the one person's speech he did not appreciate. All others, including himself, were permitted to continually violate the newly approved (and secreted) rules.

In short, Supervisor Mayer violated paragraph 9 of his own Ordinance (enforcement of the Ordinance) by only enforcing it upon one person because that person was speaking on a subject he did not want the public to hear.