Algonquin Township Road District - Unionization had nothing to do with Rabine Group - Ed Komenda missed the facts, Editors failed the public.

One of the primary issues that created all the legal turmoil for the Algonquin Road District was the secret unionization of the Road District prior to Bob Miller's departure as Highway Commissioner.

Ed Komenda with the Northwest Herald claimed this unionization was because: "The Rabine sighting scared them". Rabine being a paving company that was contacted by the current Highway Commissioner prior to taking office.  The reporting attempted to bolster that position by quoting similar claims from a union representative and former Road District employee Derek Lee, son-in-law of the former Highway Commissioner Bob Miller.

The evidence we have obtained and will lay out in detail in this article will expose key facts that paint a much different picture than the one being "told" by Komenda and the Northwest Herald.

Key quotes of interest from Ed Komenda in the NWH:

The above statements have no evidence to support them.  What we have obtained actually disproves them!

We have always asked, Says Who and With What Proof?  To us, the proof is not just some person's word, as their word is nothing more than the first part of our two-part criteria.  Let this be an example why reporting quotes without supporting facts is not a good idea.

Rich Fahey, Local 150’s business representative is quoted that the exact reason the Road District unionized is they were afraid of the privatization and outsourcing of their jobs because he (Gasser) had Rabine on the roads.  Komenda echoes that position with his quote: "The Rabine sighting scared them".

According to Komenda and apparently his Editors, these claimed sightings of Rabine is the reason for unionization of the Algonquin Township Road District.

The paper trail and timeline!

Let's start with Komenda's claimed timeline of February 28th through May 15, 2017. It would appear the paper was unable to identify the actual dates this paving company was on the road so they threw a broad timeline out there to support their narrative that just happens to be from the date Gasser won the primary to the day he took office.

Let's work backward from May 15, 2017, and show how this fabricated timeline crumbles under a basic analysis of facts, as does the employee and union representative's quotes.

As you can see, the subject of unions was under Bob Miller's awareness as early as March 6, 2017.  The fact he is obtaining a union contract from another Township raises many questions as to who really started this process but before we dive into that, which is worthy of its own article, look at the timeline.

Facts have narrowed the Komenda narrative from forty-six days to 7.  Yes, 7 whole days are all that is left to support the narrative that the reason the employees unionized was that of Rabine vehicles being spotted out on the road.  How did Komenda and his Editors miss eight key points that clearly dispute the Komenda timeline?

When was Rabine actually on the road?

That is a question that should have been confirmed before publishing a bunch of quotes that now are disproven with an actual paper trail.

Rabine Group was actually on the road doing their study for three days, April 12-14th, 2017.

So if Rabine, according to their own letter, was on the roads three days in April, 12-14th, the entire narrative pushed by the union representative, Road District employee and the local reporter and Editors absolutely crumbles because the decision to unionize was locked in place no later than March 15, 2017, a whole month before Rabine was ever even on the roads doing the study.

What did they say?

The entire narrative presented by Komenda appears to be based on false information that is clearly disputed by the paper trail created by some of the very people involved in the unionization process.

It would appear there is an attempt to create a narrative that draws attention away from the actual self-dealing that took place in the entire collective bargaining process.  When the person in charge is secretly getting emails from his son-in-law, an employee, who presents suggested changes to the collective bargaining agreement based off of suggestions from his wife, the daughter of the person in charge, it makes it clear this was not a fair and proper negotiation process.

Rabine being on the road doing their study had absolutely nothing to do with the Road District employees unionizing.  Ed Komenda got it wrong as did his Editors.  They should print a retraction and apology for such a blatant disregard for the facts. 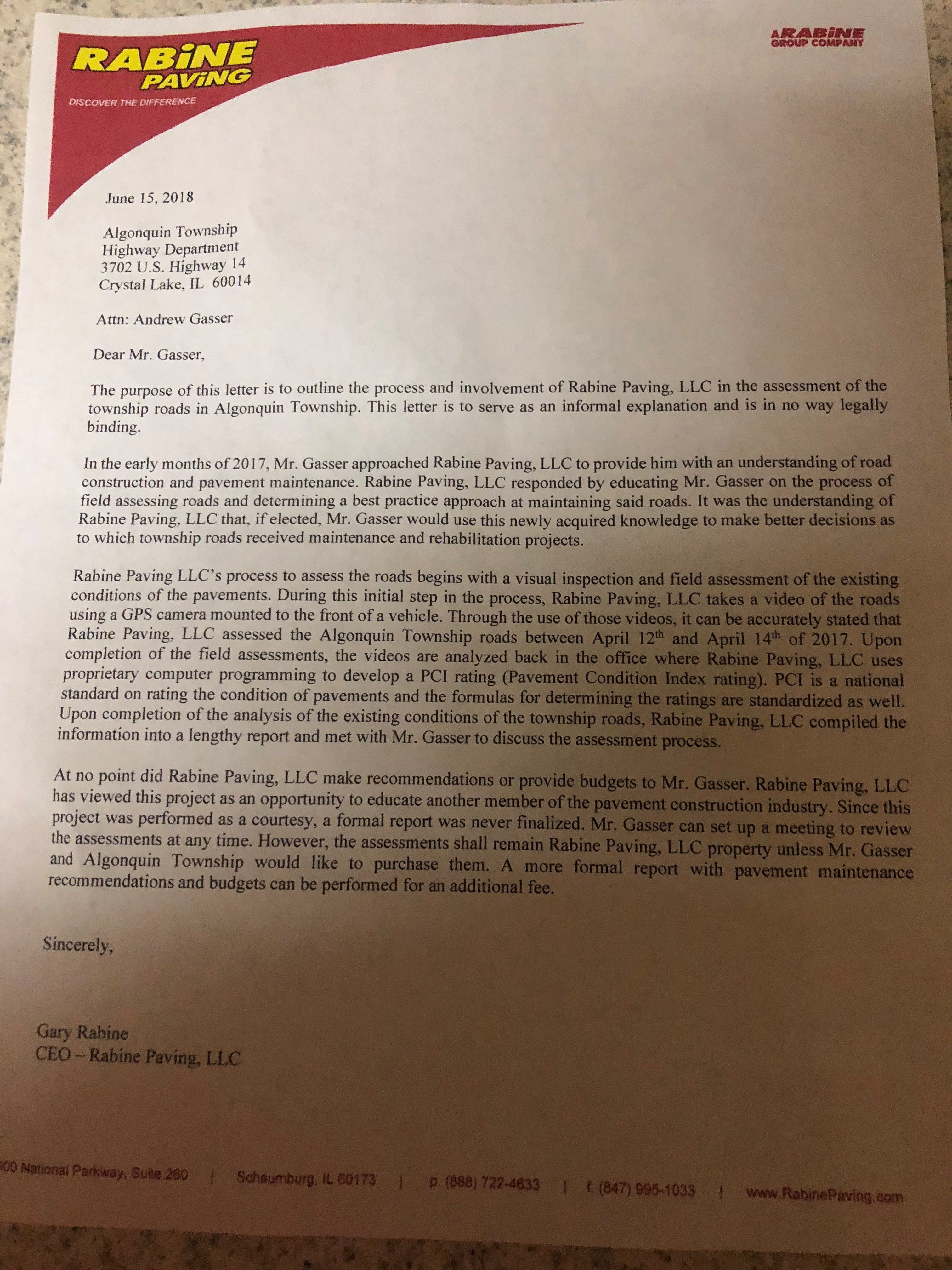