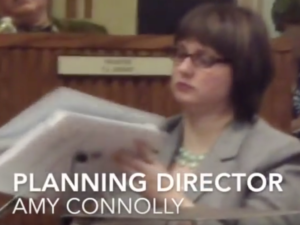 In the latest update to an ongoing legal saga that began in 2016, disgraced former Tinley Park Planning Director Amy Connolly has now lost her motion to dismiss in the matter of a federal lawsuit filed against her by her former employer the Village of Tinley Park. On November 28th 2017, Judge Sara L. Ellis ruled against Connolly in the United States District Court (Northern District of Illinois Eastern Division) and quashed her ludicrous claim of immunity for the purposes of litigation. Connolly had attempted to argue that as a former non-elected public employee she could not be sued by her former municipal employer. Judge Ellis’ full rebuke of Connolly’s crackpot theory of immunity can be found below, or HERE.

In May of this year, the Village of Tinley Park sued Connolly in federal court in the aftermath of a damaging scandal that embroiled the Village during Connolly’s disastrous tenure as Planning Director. That lawsuit alleges that Connolly violated her fiduciary duties to the Village by scheming with a controversial out-of-state developer (The Buckeye Community Hope Foundation) to tamper with Tinley’s Park’s existing zoning codes so that a lucrative tax-credit-heavy project (which Buckeye sought to build) could be slipped in under the radar, despite that project not being in compliance with the zoning code’s clear requirement for street-level commercial space to be an integral part of all new construction projects in Tinley Park’s downtown “Legacy” corridor. The low-income housing project that Buckeye sought to build appears to have been a scheme to milk huge sums of money from the State of Illinois by exploiting the shady tax credit system; this scheme could not move forward with street-level commercial development because by law the state’s tax credits that Buckeye cunningly sought would not be awarded to a project with any commercial component. The only way for Buckeye to have been able to build its tax-credit-exploiting project in Tinley Park and profit from all that state money was if Tinley Park’s zoning code was tampered with so that the street level commercial space requirement was removed (against the wishes of the Tinley Park community, which mandated said requirement to foster much-needed commercial development in the heart of the Village’s struggling downtown main drag).

Connolly, in addition to other defendants including former Village attorney Thomas Melody of the notorious law firm Klein Thorpe Jenkins, was named in a March 2016 lawsuit filed by the Citizens of Tinley Park community group to compel the Village of Tinley Park to recognize that all tampering done to the zoning code by the likes of Connolly and Melody was void ab initio, meaning that all of the word changes made to the zoning code by Connolly and Melody that ultimately benefitted Buckeye were illegal and, thus, the zoning code was never properly changed. The Village of Tinley Park settled that suit in May 2016 by acknowledging that Buckeye’s proposed development did not meet zoning code because Buckeye refused to include the required commercial component that the zoning code clearly required. Buckeye then retaliated against the Village by crying to the Justice Department (in the last days of the Obama regime) and making baseless racial discrimination accusations against both the Village and community members who objected to the Village’s zoning codes being tampered with so egregiously by the likes of Connolly and Melody. As of this writing, the Pandora’s box of legal and political messes opened by Connolly in her dealings with Buckeye is still unfolding and appears nowhere near resolution.

The Village of Tinley Park seemingly filed suit against Amy Connolly in an attempt to hold her accountable for her disastrous actions that cost the Village millions of dollars to date. In her motion to dismiss the Village’s suit against her, Connolly made the bizarre argument that she should be deemed “immune” from litigation under the common-law doctrine of “legislative immunity.” In denying Connolly’s motion to dismiss, Judge Sara L. Ellis ruled that “Illinois courts have not previously applied the common law doctrine of legislative immunity to non-legislators and Connolly has not shown that it should be extended to such persons.”

In her failed motion to dismiss, Connolly attempted to paint herself as some sort of quasi-legislator because she tampered with the zoning code and such “actions in relation to changing the Commercial Requirement (of the zoning code) from mandatory to permissive are shielded from liability by Illinois’ legislative-immunity doctrine.” Judge Ellis did not buy this argument because in Illinois legislative-immunity has never been applied to non-legislators and a village Planning Director is clearly not an elected legislator of any kind. Tampering with a zoning code is not the same thing as being an elected official properly writing legislation and thus being protected by legislative-immunity. At all times, Connolly was just a municipal employee who may have “participated in the legislative process” to the extent that the zoning code tampering she engaged in could be deemed “a legislative process,” but municipal employees such as her are not, and have never been, treated the same as actual legislators.

Judge Ellis noted that Illinois has a longstanding precedent of treating immunity from litigation very narrowly and that Connolly made no convincing argument that the Court should now break tradition and extend a new immunity to her.

The Judge then ordered Connolly to answer the Village of Tinley Park’s complaint against her by December 22nd, 2017. As of this writing, Connolly is the current City Development Director for Racine, Wisconsin. This ongoing story will be updated as further developments occur.