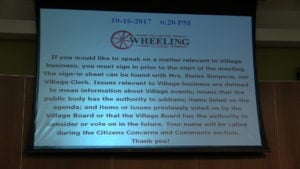 On October 16th, the Village of Wheeling and its attorney, James V. Ferolo of the law firm Klein Thorpe Jenkins (“KTJ”), were confronted with a rundown of what we believe are their recent spree of Open Meetings Act (OMA) violations. The Village Board and its attorney decided in the past to take a very hostile approach towards public comment that included shouting at the public, threatening the public with the police when they didn’t like what the public was saying, denying the public the right to speak about certain topics, and generally trampling the OMA (and the US Constitution) in a myriad of ways. As reported, the Attorney General’s Office of the Public Access Counselor wrote to Village President Pat Horcher on October 13th informing the Village that an inquiry had been opened into the Village’s apparent OMA violations. The Village’s written response is due by October 20th. Video of the October 16th meeting can be found here:

We have seen this pattern before, where all of the bluster and vinegar that public officials aim at the public magically evaporates shortly after receiving official correspondence from the Attorney General’s office. In Wheeling, a clearly chastened Village Board did not engage in any further interruptions or bullying of the public on October 16th after having received notice from the AG’s office.

Compare and contrast the behavior of KTJ attorney James V. Ferolo prior to October 16th and then after the Village was ordered by the AG’s office to respond to a Request for Review pertaining to the Village’s apparent OMA violations. At the October 16th meeting, instead of interrupting the public, threatening people, berating citizens who came to address elected officials, and otherwise behaving in a caustic and off-the-wall manner (as he had done at previous board meetings), Ferolo was subdued and sedate on October 16th. This is another pattern that has held with the Klein Thorpe Jenkins law firm in the past, where once one of their attorneys is caught on video behaving horribly during an open public meeting, a conversation appears likely to be had at some level behind the scenes where the attorney then seems to be told to be quiet and to stop engaging in such inappropriate behavior going forward (at least when cameras are rolling).

Perhaps other members of the KTJ firm take these guys aside and tell them to knock it off or maybe some of the saner heads on the Board ask their own attorney to stop making a jackass of himself on video (that is posted to YouTube forever). Whatever happens out of public view, it remains remarkable that an attorney like Ferolo can completely flip his personality 180-degrees from one meeting to another…going from aggressively interrupting and bullying the public to meekly scribbling notes in his seat and no longer saying a word.

One concerning thing that the Village of Wheeling continues to do is to post what we argue is an illegal notice chilling public comment before a public meeting. This notice was projected again on October 16th on a large screen in the meeting room and was displayed until the meeting began; the public is forced to stare at this looming notice before the meeting starts. We argue this Orwellian slide projection on the large screen is contrary to the OMA in the following ways: 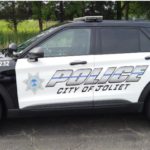