Roxana Agler -- school board member in Forest Ridge Elementary District 142 in Oak Forest, Illinois -- has been caught in emails blatantly pushing for a SLAPP lawsuit to silence a reporter. As you know, a SLAPP is "strategic litigation against public participation" and is illegal in our state, per the Citizen Participation Act (CPA), which provides for sanctions against attorneys who file SLAPP lawsuits and compels people who initiate SLAPPs to cover all legal costs from such actions.

SLAPPs are meant to silence criticism, chill First Amendment-protected free speech, and frighten away critics of public bodies. SLAPPs are a weapon of "lawfare" that some public officials believe they can use to intimidate people, scare away public scrutiny, and make reporters afraid to cover their bad behavior. SLAPPs are the ultimate abuse of power for any elected official because they are so contrary to the American system of government (where public officials are public servants, not monarchs on thrones who cannot be criticized or called out for their bad behavior). This is not Turkey (nor a Park District in Clark County Illinois for that matter), where if a public official does not like how a reporter covers a news story the official can target the reporter for persecution using state resources. That is not how things work in America. Why don't people who run for elected office in Illinois understand that?

Roxana Agler's horrible behavior during board meetings has become a news story in the last week, ever since her bizarre antics at the 4/19/16 School Board meeting were caught on video by freelance reporter Megan Fox. Since then, Agler's strange and threatening emails and her history of making unsubstantiated police reports against her enemies have come to light through FOIA production.

Her latest abuses (released to the public by District-142 on 4/26/15) involve a flurry of emails showing that in the last week she has been feverishly pushing for District 142's lawyer, James Bartley of Klein Thorpe Jenkins, to target freelance reporter Megan Fox for a SLAPP lawsuit to silence her, scare her away, and punish her for covering the news story of Roxana Agler's behavior on the D-142 School Board.

The emails show the clearest attempt we have ever uncovered (with the exception of the Clark County park District) of an elected official openly and aggressively attempting to initiate a SLAPP lawsuit. Some highlights of what Roxana emailed to D-142 President Gerry Curran and Superintendent Paul McDermott include:

Whether Roxana Agler ever intends to resign from the D-142 school board or not may appear to be a moot point, as there appears to be increasingly mounting evidence that Agler can (and should) be removed from the board for cause. 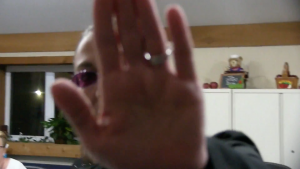