UPDATE: Orland Park Shamed Into Finally Paying $12,000 Settlement
.
Yesterday, we ran an article about the Village of Orland Park refusing to pay the $12,000 settlement that it agreed to pay on 10/19/15 for multiple FOIA violations committed by the Orland Park Police Department. You can read more on that here: https://edgarcountywatchdogs.com/2015/12/deadbeat-village-of-orland-park-hasnt-paid-12000-settlement-they-approved/
.
After being publicly shamed for not writing a check and honoring the settlement agreement the Board voted to approve a month and a half ago, today the Village of Orland Park hurriedly wrote a check for $12,000 and had it messengered over at light speed to the plaintiff’s attorney.
.
It took us writing about this matter and shaming the Village Board to get them to do the right thing and comply at last with the settlement agreement they signed in October.
.
What’s interesting is that the Village was represented in this matter by an attorney at Klein Thorpe Jenkins named Mallory Milluzzi, who had made the claim earlier this week that the Village could not possibly write a check until at least 12/8/15, because she claimed that the Village needed to vote to approve writing the check at the Board’s next meeting on 12/7/15. This was nonsense and sounded like something a lawyer says to make a weak excuse for a noncompliant client. The Village Board had already approved payment on 10/19/15 and no further meeting was needed. Ms. Milluzzi seems to have just been stalling, but said a check would be mailed or could be picked up some time after 12/8/15.
.
Why didn’t the Village just write this $12,000 check after the Board approved the settlement agreement on 10/19/15…or after they signed the agreement on 10/21/15…or after the court approved the agreement on 10/30/15? Why did the entire month of November come and go without a check being written?
.
If Ms. Milluzzi’s claims are true and the Village needs to not only approve a settlement but then at a later date jump through another hoop and approve the physical writing of a check (which sounds preposterous), then the Village had a Board meeting on 11/2/15, at which it could have approved the writing of that $12,000 check. Even if the Village waited until 10/30/15 when the court approved the settlement to get this lugubrious check-writing process started, there was still time for them to vote to approve the writing of the check on 11/2/15 (if it was really true that such a ridiculous secondary voting on the same matter was required).
.
The Village had another Board meeting on 11/16/15 as well. If we want to be charitable and believe that it’s as laborious a chore as Ms. Milluzzi made it seem to write such a settlement check and they couldn’t get it done before 11/2/15, then surely they could have gotten their act together (if they wanted to) and had the check ready to go for that 11/16/15 meeting. This is the Village Clerk’s job, after all. To write checks and honor the Village’s responsibilities to the public.
.
Instead, they just refused to write the check. You are left to speculate on why they did that. Was this long delay intentional because they resented having to shell out so much money for FOIA violations? You be the judge of that yourself.
.
After we called out the Village of Orland Park on their bad behavior in this matter on this site yesterday, suddenly no further wait was needed and at lightning speed they were able to not only write a check but spring for a messenger service to race it from the southwest suburbs all the way down to Chicago. So, not only were they no longer pretending that they had to wait until next week to write the check (as Milluzzi claimed), but they also were no longer claiming they had to mail it or have the plaintiff go to the trouble of driving out there to pick it up. They knew they were in the wrong and looked terrible for doing this and they were shamed by our article, so they hired a messenger to race that check to the plaintiff’s attorney. WHOOSH!
.
This is a classic example of why government watchdogs are needed in Illinois. These public entities think they can get away with making up stories, avoiding responsibility, stalling, and deliberately screwing the public over because they think no one is watching or paying attention. Public officials like those in Orland Park believe they are accountable to no one…until some watchdog catches them engaged in terrible behavior and exposes them for it and they are embarrassed. Only when they are embarrassed do these people ever do the right thing.
.
Less than 24 hours after the Village of Orland Park was called out on its bad behavior — BAM! — they had a complete change of heart and suddenly forgot about the nonsense that Ms. Milluzzi was going on about having to wait another week for that check. Suddenly, the Village became willing and able to write the check they owed today and messenger it over. It was a complete 180.
. 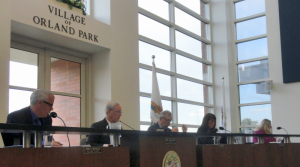