College of DuPage – Time for accountability

Resident taxpayers of District 502, went to bed last night knowing that the Illinois Community College Board (ICCB) determined that College of DuPage has been improperly counting student enrollment figures for years (Click here for more info on that article).
Although the refusal of the Administration to listen to the faculty will cost the publicly funded school roughly $400,000 – $200,000 dollars for FY2015 and FY2016, that does not account for further damage to the reputation of SLEA, who are responsible for preparing young men and women to assume positions of public trust, nor to the College.

How did we get here?

The genesis of these problems are rather clear, former President Robert Breuder produced an environment where he could act seemingly autonomously, cloaking his efforts in the narrative of fiscal responsibility; which, we all yearn for. It was not that long ago that an exorbitant amount of money was spent to produce a full color publication extolling COD enrollment numbers and other perceived administrative achievements. On pages 10-12 of that publication, Breuder proclaimed that “Running COD like a business benefits students, taxpayers.”
Regrettably what he does not understand is that business operations and decisions are tempered by risk and reputation in a free market system. Unlike a business, College administrators who make poor decisions will never skip a paycheck or see a reduction in their remuneration. In fact, the exact opposite is true, they have enjoyed raises and contract extensions despite numerous revelations of incompetence and conceit. It is time for the public to focus and demand that those responsible for feckless ‘business’ decisions are held accountable.
Despite an overwhelming amount of documentation from various sources, it was evident from the beginning that the extending, and ultimately increasing, academic credit for SLEA cadets (not students) was a fiscal decision and had little, if anything, to do with equity or fairness.
On that note, let us not forget what we published clear back in March of this year.  (Click here for that article) .

The whistle blower was clear in their opening paragraph.

“This document details an active initiative to increase Full-­‐Time Enrollment (FTE) on paper only. A review of the included documentation reveals that administrators, members of the Suburban Law Enforcement Academy (SLEA) and Continuing Education worked together to institute a rather complex process designed to inflate FTE percentages. It is through the construction of fictitious courses and the altering of the Basic Law Enforcement (BLE) academy schedule without approval from the respective agency or accrediting body that College of DuPage (COD) has enjoyed the most recent acclaim for increasing enrollment throughout the past two terms. What we have is a potential travesty for the taxpayers of District 502 and lasting damage to the College’s reputation. …………………”

The pattern is clear that not only was SLEA a pathway for more funding, we suspect the elevated enrollment numbers used in grant applications was also another tool tied to nothing more than another way to increase revenue on the backs of the tax payer.  I covered the grant application enrollment issue in May in this article.
In regards to the SLEA issue, consider these various labels created by those involved administrators, which include Interim President Collins, VPAA Kartje, and the Dean of Continuing Education Cassidy: “FTE and apportionment to support COD SLEA sustainability efforts”, “SLEA Credit Equity Adjustment”, “Hunnicutt/Casey Equity Initiative”— even to the untrained eye, the fact that there is no mention of academics or students is disconcerting.
As referenced in this article, recently obtained communications further revealed that on September 3, 2015, VPAA Kartje sent a communication to faculty indicating that, “After considerable thought and discussion with Dr. Collins, I have decided to continue the status quo until we get direction from ICCB and HLC.”
It is time for the Board of Trustees to seek out a President who understands the importance of replacing administrators with those who want more for students, the institution, and those who financially support the school, and are willing to fight for more than the ‘status quo.’
In December of 2014, Dan Maloney abruptly resigned his position with SLEA because he refused to approve the proposed change in the credit hours being given to police recruits for hours and training they never received. In other words, COD Administrators approved more hours for credit being awarded to recruits, but no more training hours were added.

Mr. Maloney should be congratulated for his unwillingness to compromise his reputation and integrity over ‘equity’ and bragging rights associated with contrived enrollment numbers.

These recent events and revelations should be the foundation for further public inquiry into the seemingly unstoppable expansion of SLEA related facilities and programs. Remember, cadets are not students, and now more than ever District 502 taxpayers are going to pay for such misrepresentations.

It is time for the public to ask for the ‘survey’ used to determine the need for Homeland Security Phase II, which cost $16-million dollars to build, how will COD pay for costs associated with maintaining and operating a gun range, and how many classrooms in the HEC Phase II are dedicated to teaching of COD students not SLEA cadets? 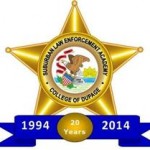