DeKalb, IL. (ECWd) –
This will be another multi-part story, and we believe we should point out all the players first so you can get a feel for who is playing what part.
Bear with us while we set this up to where everyone can grasp what happened:
The main players in this article are :
DeKalb 2020 LLC
College Town Partners NFP (Not For Profit)
College Town Partners LLC
Northern Illinois University (NIU)
NIU Foundation
Castle Bank
City of DeKalb
Steve Irving
Tim Struthers (newly appointed NIU board member)
NIU President Baker

This company is a collaboration between the City of DeKalb, NIU Foundation, Castle Bank and Steve Irving. Also included is a couple of letters between Tim Struthers (prospective BOT member)  an President D. Baker. (see this pdf)

Registered and formed in 2013, this entity had the University, The NIU Foundation, Steve Irving, and Castle Bank (Tim Struthers) as members. The purpose was to be a place where money could be donated and then moved into the for profit entity – College Town Partners LLC.  The attached file contains the communication between the players, including the offer to “manage any actual conflicts of interest“. Some additional communications involved what appeared to be coordinated efforts with foreclosure of houses and their subsequent purchase by CTP, LLC. The FSB referenced in the foreclosure letter, was also an actual/proposed partner in CTP, LLC.

College Town Partners NFP was dissolved in Sept 2014 after NIU President Baker was caught in a lie to the Northern Illinois University Board of Trustees.  The President exclaimed during a meeting that the University had no financial interest in the Ellwood Historic Neighborhood to counter Misty Haji-Sheikh at the BOT committee meeting.  Derek Van Buer immediately sent the $250,000 commitment letter to the board (see page 7 in this pdf), proving Haji-Sheikh’s statements as true and Baker’s statement as false.

This was where the money from College Town Partners NFP would be moved to.

The following article was published in the local paper:
http://www.daily-chronicle.com/2014/05/27/niu-neighbors-question-plans-for-redevelopment-partnership/a2kefqz/

here is a letter to the editor that was written at the time:
http://www.daily-chronicle.com/2014/06/16/letter-secret-plans-of-college-town-partners/abhotdk/

and here is an editorial from a local blog:
http://dekalbcountyonline.com/2014/08/college-town-partners-a-litmus-test-for-transparency/

A FOIA request was sent to both the University and the city.  The University at that time still had an open door FOIA policy so they provided about 400 pages of un-redacted material.  The City withheld almost all of the documents.  An immediate complaint went to the PAC.  The complaint is still open.  The city mostly provided the billing for Dekalb 2020.

The file Nicklas_CTP_initial001.pdf contains the email trail inside of the University. It contains a conversation about the foreclosures initiated by one of the proposed partners, FSB.
The foreclosures were not about non-payment but a decision by the bank to pull the loan for loss of property value.

College Town Partners – The City of DeKalb – Part 1:
A FOIA was denied for the background material.  It is being appealed to the AG’s office.

The 2020 Charette document shows the Mayor in attendance during the discussion and this matches his calendar.

College Town Partners – The City of DeKalb – Part 2:
The main argument from the city of DeKalb is that nothing was ever signed so no harm done.

So let us see if that is true from the evidence given, which we believe points to harm being done:
City Managers Calendar.  Annemarie Gaura was there also: 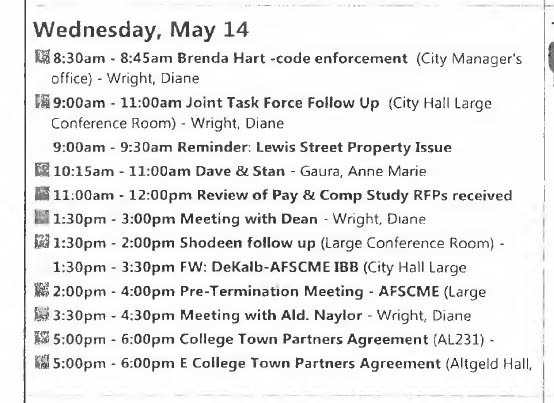 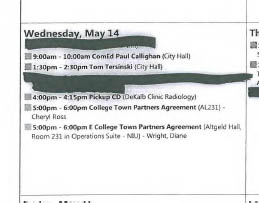 Both of these are Notary Publics.  The law firm of ICE-Miller had representatives in this meeting too.

This meeting was probably about signing the agreement.  There was no purpose for the two notaries otherwise.
We believe this is still in play in some dark corner of Dekalb County.  This group tried to include the neighborhood in the “Enterprise Zone” which caused a big public fight.
All through this Tim Struthers has been a major player, and it concerns us that the Governor appointed this character to the NIU Board of Trustees.
===================================
More to come…