Prior to embarrassing yourself in public again, I would encourage that in the future you get the facts pertaining to any accusation you’re going to make, as tonight you clearly made an ass out of yourself.

While enjoying a dinner out with my wife tonight Mr. Young of Paris felt it appropriate to introduce himself and make an accusation that I posted a copy of a personal check of his online and that he didn’t appreciate it.

You may recall Mr. Young was one of those FREE DRIVEWAY fellas that we exposed who in the end had to dip into his pocket and pay for it after we ran the article.  The check he was referring to showed up in This Article. As I informed Mr. Young, before you make an accusation, especially in a public restaurant with a man having dinner with his wife, get your facts straight.

He quickly told me after his false accusation that he was done talking to me.  I assured him, I was not done talking to him.  Make an accusation of wrong doing in front of a man’s wife, and you’re either going to prove it or get your accusation  tossed right back at you. I will not back down from the facts, nor be intimidated by a person who is clearly in the wrong in more ways than a simple false accusation.

Facts are a funny thing and it always amazes me how some people have a difficult time recognizing them, or even accepting them, yet they open their pie hole in an attempt to intimidate all the while embarrassing themselves.

What Mr. Young fails to realize, regardless of his accusation, I do not own the Edgar County Watchdog Web site.  I am a major contributor, but not the owner.  After being informed of that fact he then attempted to insinuate that it was my wife’s web site.  Wrong again Mr. Young.  Like I told you last night, this web site is owned by John Kraft.

Beyond your false accusations, I did not post a copy of your personal check on-line and all you have to do is look at the story to notice that John Kraft ran the stories on the illegal driveways, and while doing so actually did you a favor.

When John received his FOIA request while gathering the “facts”, you know those key little pieces of information that prevent embarrassment, he received copies of checks that had NOTHING redacted.

John could have ran that story with all the information on the check as we received it; with ALL your information exposed but  he did not.

John ran that story and was kind enough to redact ALL information considered private under state statute and actually went beyond those guidelines by redacting even the name of the bank on your check.

While you are upset with a copy of your personal check being posted, the general public is just as upset over the fact you think it’s alright to use our tax money for your personal driveway.

More galling to me is you don’t have the decency to get ANY of your facts straight before making an accusation, which truly had to be embarrassing for you after being held accountable IN PUBLIC, which is the arena you selected!

You see Mr. Young, John doesn’t answer to me nor do I answer to him.  We post numerous articles independent of each other, and in many cases we are not even aware of what specific article each are working on.

We take leads as they come in from the community and we FACT CHECK them with documents.  Any truth to those leads backed up by documents and we work towards running an article.  The Free Driveway article turned out to be rather interesting, as it was local people who were pissed at you and others for getting that service with their tax dollars.

The person who received an oil and chip driveway on tax payer’s dime, that would have been free had it not been for the ECWd, takes the path of making false and unfounded accusations in public, only to be disproven, all the while failing to even recognize or accept that his receipt of public property was neither legal nor ethical!

Like I have said numerous times, the message is what it is and some people just can’t accept it.  Others prefer to simply repeat what others have said with nothing to back it up. In Mr. Young’s case tonight, make accusations with absolutely not a single shred of truth to it.  Now that is embarrassing!

Taking back our local government is a road I have chosen to take and I will not be hindered or intimidated.  I will continue to expose the illegal acts being performed by our local officials as well as those private firms who think they run this county.  I will continue to provide documents as the evidence to back up what I report on, just as I have done to date.

It’s clear to me, especially after tonight, we have a class of people in this county that thinks its OK to break the law or receive public property with no legal standing, then blame others when they get exposed for what took place.

Mr. Young, the next time you want to make an accusation please have the courage to do so in writing, instead of pretending to be some big shot while I am having dinner with my wife.

Below, in support of the information I provided, is a copy of your check.  You can now claim I posted a copy of it. 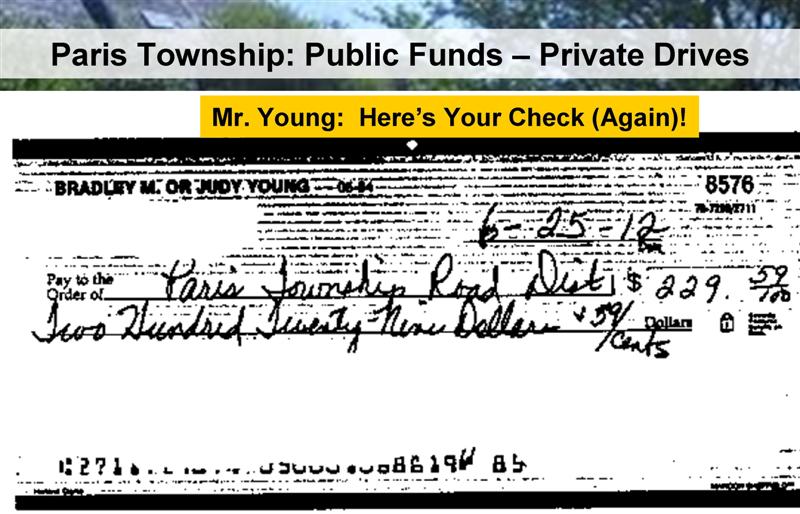