Just in case you missed reading in other local publications what really went on at the county board meeting this month, here are some comments and a video of the meeting.

– J. Kraft asked when the appointed trustees, the two that are not allowed by law to be a trustee of the Mass Transit District, would be replaced. The only answer received was “We gave it to the State’s Attorney”. It boggles my mind why it would take a State’s Attorney to interpret:  “Except in a Metro East Mass Transit District, no Trustee of any District may be an elected official of the municipality or municipalities or county or counties creating the District." (70 ILCS 3610/4)

– K. Allen asked about the Airport contract and who gets the money from the timber cutting.  (Our speculation is that none of the brilliant minds on the board gave any thought to revenue generation for the tax payers.  With luck we will be wrong!)

– K. Allen thanked the State’s Attorney for recovering the ETSB (911) funds paid to S. Craig Smith of Asher and Smith Law Office.  Recovery of those funds avoided a lawsuit intended to recover them.  It took over 14 months for the right thing to be done!

– K. Allen also asked whether the county board would remove Dee Burgin from the ETSB (911) board, especially due to the fact he was found, in a court of law, to have violated a person’s civil rights. No answer received.

– The Holiday Schedule was approved with Good Friday being added to the state required dates.

– Among other items, was a funds transfer from Animal Control to the General Fund, something that, according to the Animal Control Act, can only be transferred on the first Monday in March of each year. Funds were transferred in spite of knowing it is not allowed, something we wrote about last year also. I guess that takes the “knowingly” out of the requirement of proving “knowingly violated the law”, since it is on video.

– The County Treasurer’s report, which reflects a $1.1 Million Dollar Deficit, is here as a pdf document.

– Treasurer stated he has had several inquiries as to when the taxes for the new high school bonds would hit the property tax bills. He also had inquiries asking about the ambulance tax – answer: it was a voter approved tax, to support the ambulance district.

– County Assessor stated the continued change, and timing of the change, of insurance companies creates a hardship for her employees when it comes to the annual deductibles paid and she requested they take insurance actions at the end of the calendar years to avoids those problems in the future.

– The county farm ground leases were continued another year, under the same conditions, with the Taxpayers of Edgar County paying the property tax bill that, by law, is the responsibility of the leaseholder (as discussed in our previously published articles). I asked this question during “right to revert”, but the video cut it off.

– K. Allen asked about the contract for the Deputies, in relation to drug testing, and requested any new contracts fix the issue.

The August 8, 2012 Edgar County Board Meeting video is below.

“Never let us be guilty of sacrificing any portion of truth on the altar of peace.” ~ J. C. Ryle 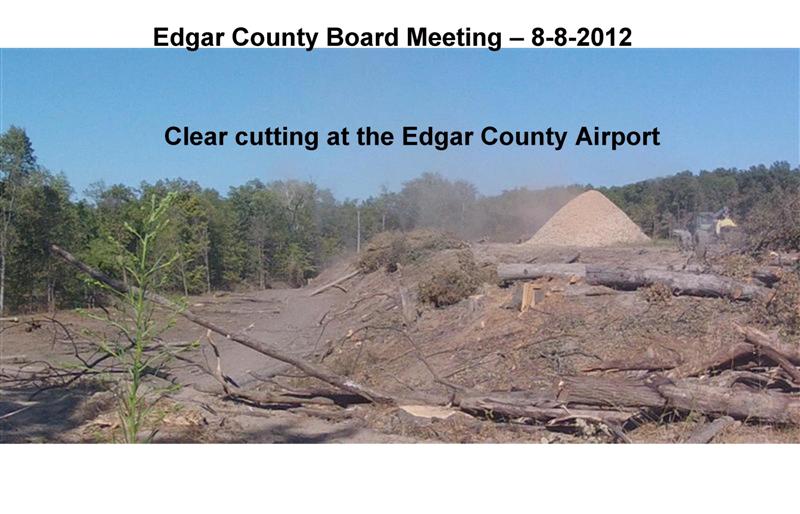