After spending more than 14 months asking the Edgar County Board and the Edgar County Emergency Telephone System Board (ETSB or 911) to recover payments for claims that we believe to be False Claims, we have taken the first step in filing a lawsuit for recovery on behalf of the people of Edgar County and the State of Illinois.

The Illinois False Claims Act, 740 ILCS 175/, provides for a citizen to act, in the name of the State of Illinois, to recover funds obtained through submission of false claims. This action does not require proof of specific intent to defraud. Please feel free to read the entire False Claims Act, it’s fairly short.

(b) Actions by private persons.
(1) A person may bring a civil action for a violation of Section 3 for the person and for the State. The action shall be brought in the name of the State. The action may be dismissed only if the court and the Attorney General give written consent to the dismissal and their reasons for consenting.
….is liable to the State for a civil penalty of not less than $5,500 and not more than $11,000, plus 3 times the amount of damages which the State sustains because of the act of that person. The penalties in this Section are intended to be remedial rather than punitive, and shall not preclude, nor be precluded by, a criminal prosecution for the same conduct.
The Act also provides for recovery of reasonable attorney fees and court costs. After many months of researching, we have decided to take this course of action due to the unresponsiveness of the County Boards members, the ETSB members, and the unresponsiveness of the Edgar County State’s Attorney.
The False Claims
The first claim we believe to be false were the Public Funds paid to S. Craig Smith for services rendered acting as the private attorney for the ETSB, an act that is not allowed by law as the State’s Attorney is duty bound to represent and defend the ETSB – a Public Body of the Edgar County Government.  That key fact was supported by our presentation to the County Board with the reading of an Attorney Generals opinion on the matter.  Shortly after that reading is when Craig Smith was relieved as the ETSB Attorney. Craig Smith OUT as ETSB Attorney
The second claim we believe to be false were the Public Funds ($50.00 per month) paid to the ETSB Coordinator for attendance at meetings in months where no such meetings occured. These particular claims were filed and paid every other month for almost 6 years.
The individuals named in the notice are Nanette Crippes for her act of submitting the claims, and Merle Clark for his act of aiding Mrs. Crippes in the submission of those claims.
A third claim in which we were intending to recover were the payments of Public Funds, approved by the County Board, to the private attorney hired by the Edgar County Sheriff Department. The State’s Attorney beat us to that one as he sent letters to the Sheriff and the Attorney involved demanding reimbursement. We just wonder why he did not demand reimbursement from S. Craig Smith until after we filed our notice of intent to file suit for recovery. Was it because they were previously law partners? Was it because he has a personality conflict with the Sheriff? We will probably never know those answers as we cannot read minds.
Notice of Intent to File Suit for Recovery
The notices are available for download/viewing by clicking on the links below. These were duly filed on July 31, 2012 with the Edgar County Clerk  with copies given to Mark Isaf the Edgar County State’s Attorney, Jim Keller the Edgar County Board Chairman, and Dee Burgin the ETSB Chairman.
The first Notice of Intent to File Suit for Recovery – Public Funds paid to S. Craig Smith
The second Notice of Intent to File Suit for Recovery – Public Funds paid to Nannette Crippes
UPDATE: One Claim Recovered!
While writing this article, we attended an ETSB meeting. During public session of the ETSB (911) meeting last night, 8-6-2012, Dee Burgin, the chairman of the ETS board, after Kirk asked whether they had received the notices, stated that S. Craig Smith had reimbursed the people of Edgar County for the amount of the payment, $1157.95, he had received while acting as attorney for the ETSB, an act prohibited by law just as we had pointed out over 14 months ago! If you read the letter to the Sheriff’s Attorney before reading the letter to Smith, I’m sure you will notice a huge difference in the civility of the two letters. It took 2 days after we filed the notice of intent for Mr. Isaf to request reimbursement – something he’s had personal knowledge of for over a year!
The other claims deal with payment for meeting attendance where the meeting did not occur, and Mrs. Crippes stated she had provided a written statement to the State’s Attorney in response to our Notice of intent to file suit. 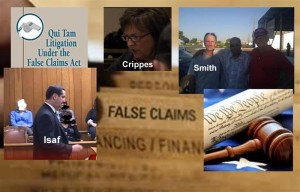