When the government publishes information behind the scenes that doesn't match what they tell the public, it creates distrust. Even more concerning is when they refuse to respond to Freedom of Information Act requests and have to be sued to obtain public records, which one would think would validate claims being made by the government.

September 19, 2020, I filed a FOIA request to the Illinois Department of Public Health in order to validate the information leaked to us and later obtained through another FOIA request.  Specifically, I wanted the source data that created the pie chart found on page 13 of this document which was published internally by IDPH.

On the right-hand side of page 13, it states, "Outbreaks by Type since July 1, 2020 (based on First Onset Date). What the government was attempting to claim was that they knew the source location of COVID cases, which they broke down in the pie chart.

At this stage of the COVID battle in this country, we have yet to see any evidence that can confirm the exact location people were infected, but all that aside, the numbers are either bogus or the claim that it represents outbreaks since July 1, 2020, is false.

I waited 6 months before having to sue IDPH for the source data used to create the pie chart.  A few months after filing suit, IDPH was provided an extension of time to answer the lawsuit and on the very day that answer was due, they responded to my FOIA request rather than answering the lawsuit as agreed upon.  How special for IDPH to provide me a document that they claimed was the source data for the pie chart creation almost a year after I asked for it.

The first huge red flag was the data found in the file they provided.  It reflects the document they provided me was created on 7/20/2021 and then modified on 9/9/2021, the day their answer to our FOIA lawsuit was due and the day they answered my FOIA request. This raises concerns considering the claimed source data document was created10 months after the pie chart was published. 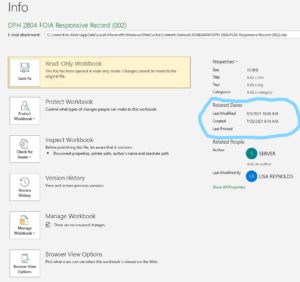 So what is the public to believe?

In short, the numbers do not add up!

We have filed another FOIA for source data except this one is for the source data used to create the source data document they created almost a year after my original FOIA request.  At some point, the public must be informed how they isolated specific case locations for COVID infections.

You decide, can you believe what you are being told?

You can download the claimed source data at this link or view below.