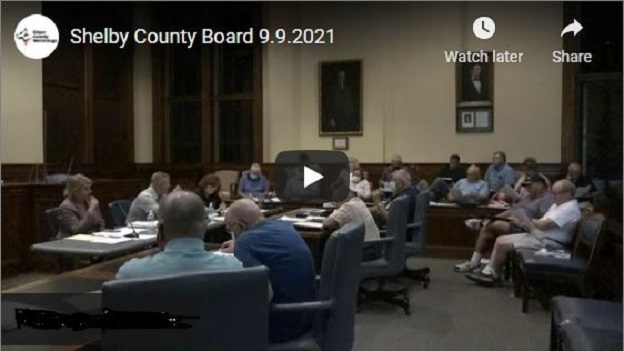 The Shelby County Board held its Sept 9, 2021, meeting last night.

Watch the video below - ECWd livestreamed the meeting last night.

One of the first items "acted on" was denying a board member's electronic attendance prior to the meeting starting. Shelby County State's Attorney recited the appropriate provision of the Open Meetings Act, which requires that in order for a public body to permit attendance electronically, they must first have a policy authorizing electronic attendance. Shelby County has no such policy. See the AG's August 2, 2021 Opinion (HERE).

The Board appointed Brian Kaufman as Chairman of the County Board, it appointed Gary Patterson as Vice-Chairman.

The Board took public comments, there were several Deputy Sheriffs in attendance, in uniform, politicking for their preferred candidate to be appointed to the vacancy in the Office of Sheriff of Shelby County. I voiced my opinion that deputies in uniform should not be campaigning for a political appointee.

The Board later voted to appoint Sean McQueen to the office of Sheriff, even though the last primary ballot he pulled was Republican, the office he was appointed to was required to be filled by a Democrat (since the retired Sheriff was a Democrat).

Approved EMA director's duties, responsibilities, and terms of employment, without reciting any of the general provisions of the action.

Ratified AFSCME contract through August of 2024.

Voted to approve a contract with Paylocity for payroll, timekeeping, and human resources - even though some of that is the statutory duty of the Treasurer. Maybe board member Williams should have suggested "it's a law, the law's the law in the state of Illinois"

Took no action on the Noxious Weed complaint against the county's farmland - we suggest there is no complaint since the notice of the complaint was not served on the county properly, according to Section 21 of the Illinois Noxious Weed Law. Lynn Williams did say they should follow the law ("it's a law, the law's the law in the state of Illinois") - something he has not advocated for other issues the county has faced. We agree - follow the law, for everything, not just those that you agree with.

During discussion of the noxious weed complaint, some members of the board circled back to the issue of leasing out the farmland again (even though state law does not permit it) - Maybe board member Williams will suggest "it's a law, the law's the law in the state of Illinois" when the leasing issue surfaces again?

Made appointments to various committees, and boards.
.