August 5, 2021, the Shelby County Insurance Committee met to discuss Health Insurance, Family Health Insurance plan options, and recommendation to be presented to the county board regarding a former employee.

Where to start is a tuff one. The short version is the committee voted to do nothing to recover the $34,297.01 improperly spent from the general fund on Keith Petard’s insurance claims.  In addition, the State’s Attorney determined there is no winnable criminal case against Petard, even though there has never been any criminal investigation or even questioning of Keith Petard.  How special is it that 2 county board members get to make a determination to do nothing on behalf of the entire county board on a matter never investigated by any law enforcement?

Shelby County State’s Attorney Nichole Kroncke stated it was wrong for Keith Petards’ name to have been released on this matter. 1:36:30 – 1:36:44

Why is it wrong for the public to know an employee’s name who misrepresented the truth which resulted in tens of thousands of taxpayer dollars being spent that shouldn’t have been?

During public comment, there were concerns raised about a suspected illegal activity where the employee worked.  (1:37:02).  The short back story on this, Keith Petard is the business partner of Shelby Engineering and worked at the highway department with Alan Spesard.  Spesard has admitted, on official documents, that Shelby Engineering has used public resources to operate his business.  With Petard being a partner in Shelby Engineering, that makes him a party to the alleged criminal activity which is/was being investigated by the FBI. The concern was that maybe if this person thinks he got away with the prior acts it was OK to continue to misrepresent the truth in the insurance matter.

The most fascinating part of this interaction is the facial expression of one board member, Teresa Boehm, (1:37:02). Thanks for not wearing a mask so we could actually see your facial reaction.  It’s clear she had no clue that Keith Petard was in fact the business partner in Shelby Engineering and I would bet has no clue the FBI is/was investigating that matter.

The response from Coffman was, let’s just say disturbing.

Coffman denies any knowledge of the alleged criminal activity, then accuses the citizen of doing a lot of “hearsay thinking“.   This is hard to believe considering Coffman was on the Road and Bridge Committee when we first exposed the use of county resources by Shelby Engineering.   In fact, he was at the very meeting where we addressed that issue, and the then-county chairman confirmed the improper acts had been going on for years.  If Coffman actually has no clue that Keith Petard is the business partner of Alan Spesard then he must be ignoring the information that has been presented for months on this matter.

For the record, the citizen was not engaged in hearsay thinking as Coffman claimed.  It is an undisputed fact Keith Petard was the business partner of Alan Spesard in Shelby Engineering.  It is an undisputed fact those two county employees used the county offices for their private business, Shelby Engineering, for years, and even documented it on official Illinois Department of Transportation records that we published.  For Coffman to imply the citizen is engaging in hearsay thinking is disingenuous at best.

One response from Coffman as part of that discussion, in particular, is probably the most hypocritical comment I have ever heard from a board member. 1:38:05 – “I think to try to put yourself in somebody else shoes, and their thoughts and their minds is not an appropriate position”.

How special is that quote?  Especially after Coffman voted to do nothing to recover the funds.  Did Coffman inappropriately put himself in the shoes, thoughts, and mind of Keith Petard?  His words: 1:35:20 –  “We feel that there was no fraud that occurred, we feel that he was in a possible emotional distress, and was given bad advice by certain people.”

Sure sounds like a motion was adopted to do nothing based on feelings.  Did Coffman put himself in the shoes, thoughts, and mind of Petard when he came to his conclusion?  Who are these “certain people” that gave him bad advice?  Where was that finding in any investigation?

Understand what really happened here: Feelings made a determination to do nothing.  Feelings based on a situation that has never been criminally investigated, to include not so much as a conversation with the alleged violator by a single law enforcement investigator.

Coffman “feels” that there was no fraud and that Petard was in possible emotional distress.  So how do Coffman’s feelings negate the fact tens of thousands of dollars were spent improperly.  It appears he was either not paying attention or chose to ignore one key statement by the State’s Attorney.

1:25:39 – “We can ask him to reimburse it, um, we can always do that, I have heard he has responded that he does not have the money and would declare bankruptcy if it did go to court but I have not spoken with him personally.”

So we now have confirmation the State’s Attorney has not spoken with the person, Coffman “feels” there was no fraud, and the other board member believes our heart plays a role in the recovery of taxpayer funds.

1:26:00 – “When a person is that sick, doesn’t your heart enter into this too if you don’t think he did it willfully and then you are going to pile this on top of everything else that he’s going on in his life and stuff”

To Coffman’s credit, he put Boehm’s comments in check as her heart comment should not play a role in recovering taxpayer funds.

While we have no clue if Petards actions rise to the level of a criminal act, we do know from years of experience before such a determination can be made there needs to be an actual criminal investigation.  No such thing has happened in Shelby County.  Ironically, even if there was no criminality in this case, two people have determined to do nothing to recover the money, which could be done without criminal prosecution.

In regards to the alleged comment from Petard filing bankruptcy if the county tries to recover the money, so be it.  He is a partner in Shelby Engineering, a company that operated out of a county facility and using county resources for years.  Is the taxpayer not entitled to recover funds?  If he files bankruptcy to try to avoid paying those funds back, then move to discover assets, which Shelby Engineering is one asset.  The alleged claim of filing bankruptcy if you try to recover the funds comes across as a threat.  It appears to have worked.

Bryon Coffman leans over to the other board member and has a private conversation that can not be heard by the other members or even the camera microphone.  That may well be an OMA violation.  1:34:55

1:35:22 – Coffman asks the State’s Attorney if they can make a motion on the matter and the State’s Attorney says. “yeah, that’s fine“.  Never mind the fact the agenda has nothing listed for action, only discussion.  This is one of those cases where the board members should have known better but instead relied on an off-the-cuff opinion from the State’s Attorney which appears to have been wrong.  This is another one of those cases that supports why we urge public officials to write out their questions when it comes to getting a legal opinion and get the opinion in writing.  When that happens, these kinds of mistakes rarely happen.

As it stands, the Shelby County Insurance Committee has voted to do nothing to recover $34,297.01 from Keith Petard.  There has been no criminal investigation or interrogation of Keith Petard, yet the State’s Attorney has said there is no case.

The actions of two people have now spoken for 20 other County Board members to once again do nothing on behalf of the harmed party, the taxpayer.  This has become a common theme in Shelby County.

While we could list numerous other well-documented cases of illegal activities in Shelby County by elected officials over the years that have all been ignored by those who could prosecute, the point is the pattern appears to be to do nothing to protect the taxpayers from these acts.

The entire video from the meeting can be viewed below or from any of the links above.  The video was not edited in any way however we will be swapping it out with an audio boosted version so it’s easier to hear the discussion. 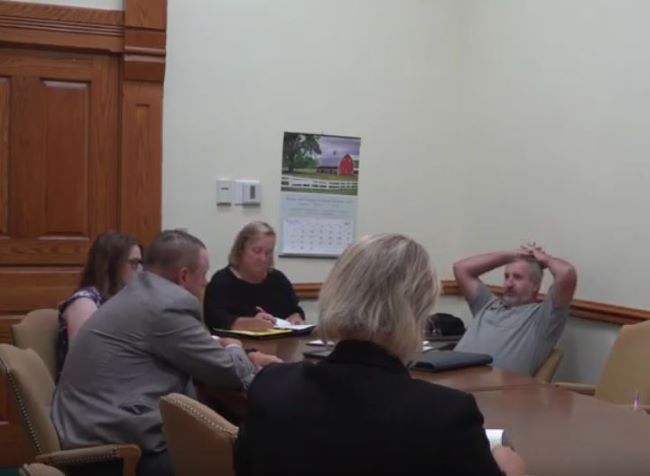