Shelby County – Does State’s Attorney Warning During County Board Meeting Apply To Her Husband Billy?

During last week’s Shelby County Board meeting, the State’s Attorney issued a warning to people in the county.

“I think people in this county better be careful about publicly accusing others of misrepresenting and being dishonest when you don’t have facts or evidence to back it up.”

We totally agree with the statement.

One can only wonder if the warning applies to her husband who recently took to social media posting implications of libel, lies about his wife hiring Ed Flynn, and then accusing a State Representative of editing videos and then providing them to us.

What did Billy Kroncke say? 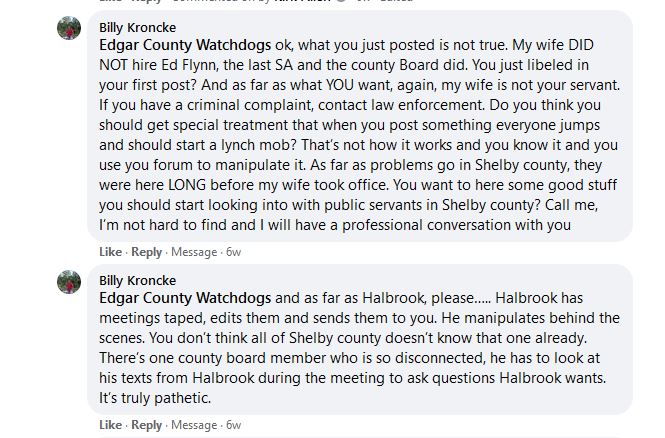 “Edgar County Watchdogs, ok what you just posted is not true.  My wife DID NOT hire Ed Flynn, the last SA and the County Board did. You just libeled in your first post?”

“Edgar County Watchdogs and as far as Halbrook, please….. Halbrook has meetings taped, edits them and sends them to you. He manipulates behind the scenes.”

So while Billy claims his wife, the current Shelby County State’s Attorney did not hire Ed Flynn, we now see a flat out lie being published by the very spouse of the State’s Attorney who issued the warning to the public about “..misrepresenting and being dishonest when you don’t have facts or evidence to back it up.”

The truth is Mr. Kroncke, your wife DID hire Ed Flynn.  You can click here to read the actual proof or simply scroll down and see it below.

As far as Kroncke’s claims about Representative Halbrook, it’s not true. Halbrook has never provided us edited videos of meetings he had taped.  Halbrook is prepared to provide a sworn affidavit to that fact and we can do the same.

Billy is not a newcomer to controversy.  According to the Chicago Tribune, as an Illinois State Police Officer, it was alleged he struck a person in handcuffs during questioning and it was captured on video.  Unfortunately, we have been unable to locate a copy of the video.

“Kroncke is standing in front of him, to the left in the camera shot. According to O’Reilly, Gaughan was talking and Kroncke was listening when Kroncke slapped him twice with his right hand. Gaughan was hit once across his left cheek with an open hand and then was slapped again.”

“The tape indicates that Schroeder witnessed the slapping, then turned and left the room.

“I was just shocked that the Illinois State Police would act this way and knocked another man unconscious in front of me,” Kevin Gaughan said. “They’re criminals.”

It’s clear Kroncke made public comments that are not true, including others we did not publish in this article.  Ironically, the first lie we exposed is proven a lie by his own wife’s public record, the very person issuing warnings during a County Board meeting.

More proof she hired him? The county was billed $750.75 for services in December of 2020, the first month Nichole Kroncke took office.

And for those that continue to falsy imply the videos we post are edited to misrepresent, here is the entire video where the above video was taken from. 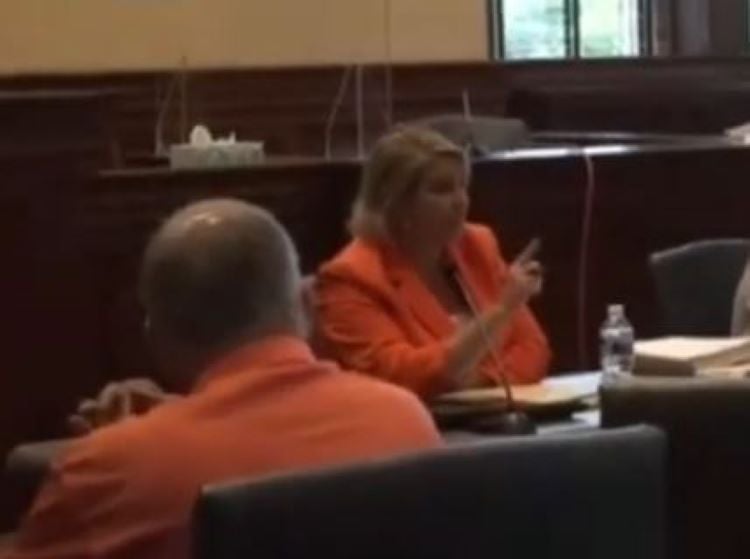