Today, in a 33 page opinion, the First Appellate Court in the State of New York suspended the law license of Rudolph Giuliani:

“suspended from the practice of law in the State of New York pursuant to Judiciary Law § 90(2) and 22 NYCRR 1240.9(a) (5), effective the date hereof, until such time as disciplinary matters pending before the Committee have been concluded, and until further order of this Court, and . . . “

For the reasons that follow, we conclude that there is uncontroverted evidence that respondent communicated demonstrably false and misleading statements to courts, lawmakers and the public at large in his capacity as lawyer for former President Donald J. Trump and the Trump campaign in connection with Trump’s failed effort at reelection in 2020. These false statements were made to improperly bolster respondent’s narrative that due to widespread voter fraud, victory in the 2020 United States presidential election was stolen from his client. We conclude that respondent’s conduct immediately threatens the public interest and warrants interim suspension from the practice of law, pending further proceedings before the Attorney Grievance Committee (sometimes AGC or Committee).

Giuliani’s son posted a video on Twitter about the suspension (HERE).

We recommend you read the suspension decision below, or (HERE): 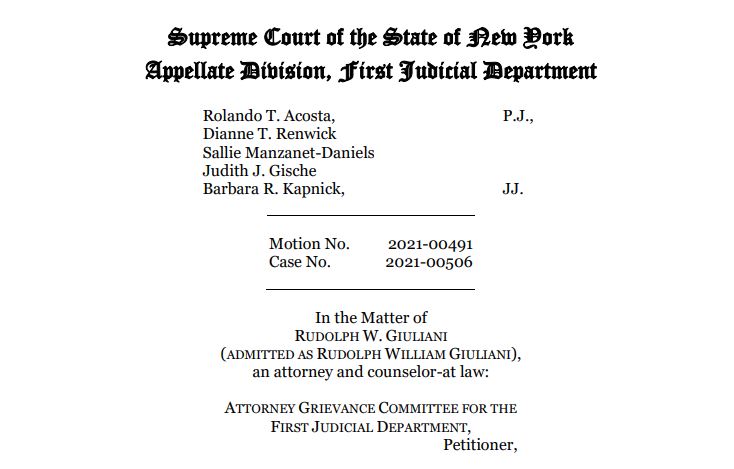