November 18th was the seven year anniversary of the firebombing at the Edgar County Airport where two aircraft were destroyed by unknown suspects in the middle of the night.

Our hope is that anyone who knows anything about the firebombing of these two aircraft will come forward with any information they may have so that those responsible can be brought to justice. We do know that someone out there knows something about this, and most likely more than one person was involved. It is time to clear your conscience and come forward with whatever information you may have.

Spray painted on the side of the aircraft were the words “Fuck Rob” and “This is our airport” indicating, to us at least, that this was a personal grudge against those who were questioning activities at this airport and had some personal interest in the airport.

We later learned that because of an outstanding bill owed to the cell phone company in another case, the state police did not request cell tower data during their investigation of this crime (see the email here). According to sources within a state agency, one issue that could have shed light on those responsible for the double-airplane firebombing would have been access to Verizon cell phone tower data – which could not be had due to Illinois’ failure to pay their Verizon bill incurred thru a double-murder investigation years earlier.

We do know that only one of the original four or five “suspects” agreed to be questioned and undergo a polygraph (read the article HERE). Three others refused.

Incidentally, there was also a plane crash in 2014 kept secret from the public – it occurred on Edgar County Airport property and nobody saw anything…even though it was towed into a hangar after the crash, and was later decertified and exported to Bolivia, in South America.. There were a variety of stories told, including that a deer was on the runway – but that story failed when after the crash, the former airport manager told IDOT during a meeting we attended that they did not need funding for fencing because they never experience a deer problem on Edgar County Airport property. 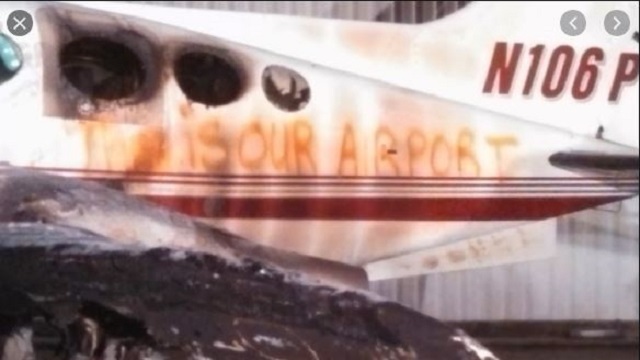