Shelby County, Where Laws Are Ignored, Nepotism Encourage By Board Members And State's Attorney - Hypocrisy Alive And Well

Shelby County Board Chairman, along with a majority of the board, chose to initially go along with violating the Open Meetings Act obligations during a recent meeting (article here). It was not the first time this board has ignored the Open Meetings Act to include discussing matters in closed session that are not listed as an exemption for such discussions. (article here)

Within our last article on this matter, we encouraged those who have failed to take the required Open Meetings Act training to do so.  As of August 20, according to County records, there are no OMA training certificates for Robert Jordan, Terry Metzger, Earl Baker, David Swits, Frank Mulholland or Lynn Williams on file.

Understanding the fact that they are not on file does not mean they did not do the training, we FOIA'd the Attorney General for evidence they have taken the training.  The Attorney General response confirms Shelby County Board members Jodan, Metzger, Bake, Swits, Mulholland, and Williams have not registered for nor completed the OMA training as of August 31, 2020.

The State's Attorney filed a motion for appointment of counsel for the County Board.  Contained in that motion is a claim the County Board requests that certain attorneys from the firm of Nixon Peabody be allowed to enter their appearance as special assistant state's attorneys in this litigation.  There has been no public discussion of this matter nor any vote taken by the County Board for the pursuit of this private counsel.  Ironically, the State's Attorney still does not understand the provision of hiring private counsel.  In the motion, she seeks the counsel to be appointed as Special Assistant State's Attorney.  While the term "Special Assistant State's Attorney" is not defined in the statute, the legislative intent of that position is for such hiring to be done to "assist" the State's Attorney in complex litigation.  Since the State's Attorney admits she is conflicted, she can not participate in any part of this litigation so there would be no way for anyone hired to "assist".    Never mind the fact the law states the appointment is actually for a special prosecutor, which is not the same as a SASA.  55 ILCS 5/3-9008 (a-15) 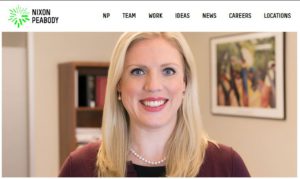 Hypocrisy is alive and well.

We understand Board member Swits sister, Deanna Rene Kunze is a partner at the firm named in the State's Attorney's motion and it is her they would like to hire.  We note that there is no reference to any experience in local government matters.

During the last County Board meeting, it was verbally expressed that they wanted to keep the Audit with someone local rather than a person from Chicago. Nevermind the fact the person was not from Chicago or even Cook County.  The fact remains, they did not want a firm from Northern Illinois doing their audit but now they want an attorney who is not only related to a board member but is located in a Chicago (Nixon Peabody).

Is nepotism alive and well in Shelby County?

While there is no question the hiring of a board member's family member points to nepotism, it is not illegal if done properly. Much like hiring an auditor that actually has clients that are County Board members.  It too points to nepotism but it is not illegal.  As it relates to the hiring of the auditor, while not obligated to disclose who his clients are, we understand the ethical thing to do would be to disclose that there are members of the board who are his clients.  One would think this would have been disclosed when the discussion shifted to "concerns" of a prior relationship.  While the auditor addressed those concerns, he was silent on the issue of the fact there are people voting on his $45,00.00 contract that are in fact his clients. We challenge ALL the board members who are his client to disclose that fact.  To date, we have confirmed one through a great discussion.  That board member did not vote in favor of that auditor.  Questions to the auditor have gone unanswered.

Shelby County Government is rapidly growing on our list of horribly run County Governments in Illinois.  We encourage voters to educate themselves and ensure they vote for those who are actually working to fix all the problems we are exposing.