After numerous tips of self-dealing, to include use of county resources during his county employment hours, streamed in, the response to our FOIA requests was shocking, to say the least.

Let’s look at two documents on the Shelbyville Streetscape project.  The information is not only troubling but an admission of violating the State Constitution.

“Background Information:
Shelby Engineering is a local partnership formed in 1999 between two individuals (Keith Petard and Alan Spesard). The partnership was formed with the intent to provide needed and affordable engineering services to local agencies in Shelby County. To accommodate that intent the local agency, Shelby County, has allowed the partnership to use their facilities during non-working hours at no cost. Shelby Engineering’s primary client is the City of Shelbyville (nearly 90%) with the remaining workload consisting of Motor Fuel Tax maintenance programs for several villages and cities in Shelby County. Shelby Engineering hires technicians (Chad Petard, Cam Spesard, Arny Kenworthy, Trevor Blackwell, and CJ Hayes) on an as-needed basis.”

There is no provision in the law permitting a county to allow the use of its facilities to a private company.  For those not familiar with the law, Article VIII Section 1(a) clearly states, “Public funds, property or credit shall be used only for public purposes.”  The use of public property for a private business violates the law, and in most parts of this state is considered a crime. A request for all records to support the claim the county has allowed this action resulted in no record of any approval by the county.

A prior submission for the same BLR 05611 project:

Considering Spesard has now lawyered up and will not answer questions, we may never know why one document discloses the use of the public property when the prior document was void of the statement, “Shelby County, has allowed the partnership to use their facilities during non-working hours at no cost” .

In the 2016 document, he claims to have a downtown field office that he uses for free. The address is that of his father’s Veterinarian clinic.

While the 2016 document should prove to be very problematic for Spesard, the 2013 submission raises even more troubling admissions when looked at together.

In the 2013 submission, mysteriously void of the admission of using county resources at no cost which he has admitted to on video in Part I of this series, he provides an explanation for the cost estimate that is different than the first document.

“There currently is very little overhead, indirect cost or In-House Direct Costs (except for supplies) charged to the client due to the following reasons”. -“The office is used free of charge and thus no applicable costs are “passed on” to the client”.

Very little overhead?  There is no overhead for the use of the county resources.  How special to be the County Engineer and allow yourself to use county resources for your private engineering business.

In the 2016 document, he claimed the technicians with an asterisk are independent contractors, thus expenses of fringes, benefits, and insurance costs are not passed on, then just below that claims his son is an employee and his payroll additives are included in the overhead.  Nevermind his son’s name had an asterisk next to it which indicates he is an independent contractor.

Spesard did not appear for the county board meeting yesterday, and according to County Board Chairman Cannon, was advised by his attorney to not attend.  Considering he is the County Engineer we find it troubling that his personal troubles have now been allowed to take priority over his county obligations of being available to the county board to answer any questions on county projects that he submitted resolutions for adoption.

Any county chairman who thinks it is OK and does not demand the employee be present needs to be removed from his chairmanship as well as his county board member position.  We echo citizen’s calls for him to resign.

Stay tuned for Part III which will disclose the volumes of private work on county time. 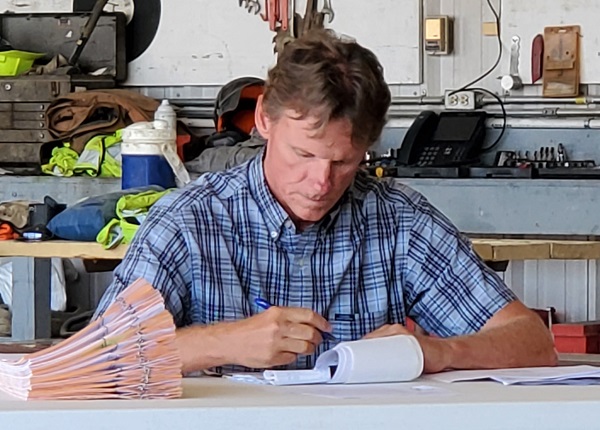