Bellmont Mayor admits to perjury, skips out on court hearing –

We attended a court hearing in Wabash County last Thursday in the matter of a Motion of Sanctions and attorney fees filed against Bellmont Mayor Gary Lance for his performance during his several attempts at obtaining Restraining Orders against people for posting the Truth on Facebook.

The Truth consisted of a video of him using the village tractor to spread rock on his private property.

Attorney Jonathan Turpin represented the Movants in these Motions. There were five separate Motions to be heard.

Attorney Turpin did an outstanding job asking the right questions and soliciting answers from Lance over the phone during the hearing – essentially boxing him into a corner with his answers.

When asked about his location, he kept repeating that he was not in Bellmont.  Asked for his location again, he said Indiana.  Further questioning elicited a response of Rural King, and then after being asked for his specific location by the Judge he said, Princeton, IN.  It was clear he was being evasive.  Not missing a beat, Attorney Turpin asked the Judge to order Lance to provide a receipt for where he claimed to be shopping.  The Judge directed Lance to provide a receipt to the Court at the next hearing to prove he was actually where he told the judge he was located.  This is sure to be problematic considering Turpin was well prepared to prove he was in Bellmont.  We suspect any receipt he does bring to court will not reflect the time as directed by the Court.

During the Hearing, Lance admitted to perjury in the previous hearing and apologized for it by stating that he did use the village’s tractor, even though he stated in court (and under Oath) that he did not.  Due to that admission, a criminal complaint was filed with the Wabash County Sheriff’s office and we have been told it was forwarded to the State’s Attorney.

During a conference call outside the Courtroom, Lance was given the opportunity to resign from office, and have all of these Sanction Motions be voluntarily dismissed. He declined the offer.

These Sanction Motions include the following, nearly identical in all five Motions:

Having watched numerous attorneys in courtrooms across this state, it’s clear Attorney Turpin is well versed in the law and fully capable of a real Perry Mason style line of questioning. While his clients could not witness the one-two punches being delivered, due to not being able to be in the courtroom since they were witnesses, we assure them they had great representation. 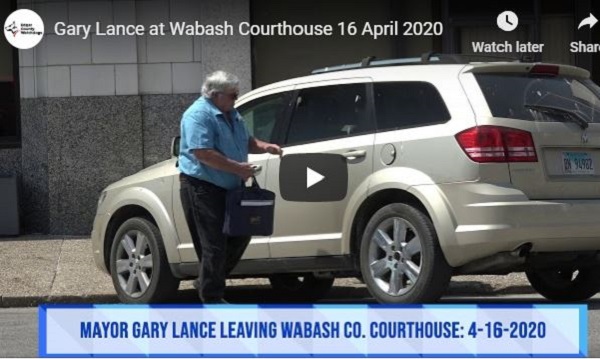