We had previously written about Algonquin Township paying its attorney to try and censor a video obtained from Township cameras (here), which at the time did not work very well for them. According to their attorney’s invoices, several communications were had between him and YouTube and are still the subject of a Freedom of Information Act lawsuit which the township will end up losing.

Our original article with the video in it is (here).

Apparently someone, we believe either the Township Clerk, her family member, or the township attorney kept complaining to YouTube.

In March of 2020, YouTube sent us a message stating they had taken the video down because of a privacy complaint.

What YouTube apparently was not aware of, was this video was eventually obtained through a Freedom of Information Act request, albeit after we posted it online, and is no longer subject to any privacy concerns with it being a public record of the township.

In the interest of full disclosure, we provide the video as it was received under the Illinois FOI Act from the McHenry County State’s Attorney Office.

To the Algonquin Township Clerk Karen Lukasik, or whomever finally succeeded in censoring and taking down a public video from YouTube, you should be ashamed for promoting censorship.

Try taking this one down. The other censored video of the Clerk and her family in the basement file storage room will be in an upcoming article.

From the previous article:

At the 12:17 mark of the video, Curtiss asks the Clerk: “Karen, do you have the authority to be going through this stuff?” Lukasik responds with: “I can do whatever I want”.  Then, as if the Clerk’s authority is all encompassing to her, she admittedly starts going through Township employee Ryan’s “stuff”.  She even tells Clerk LuKasik at the 13:16 mark of the video that she is going through “Ryan’s” stuff, which generated a response of; “I don’t give a shit…….go through it all”.  By asking if the Clerk had authority to go through stuff you would think she would understand that the same authority question would apply to her.

This video provides clear indicators that the Clerk was not honest with her responses to our FOIA requests and is not a trusted keeper of the records. Additionally, as statutory custodian of the records, her response of “I don’t give a shit……go through it all”, is sufficient to call for her immediate resignation in our opinion.

Any Clerk that brings in another person from another community and allows them to have free access to records to include leaving them in that office alone with those records is not protecting the records of the Township. 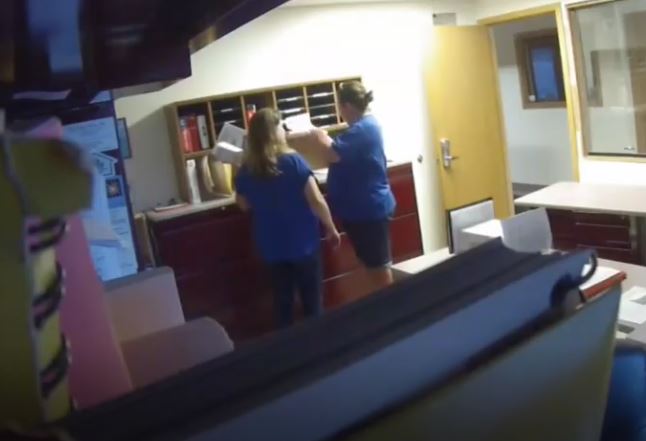