Over the last week, we have been bombarded with all kinds of accusations and insinuations regarding Governor Pritzker and his financial ties to companies involved in medical testing issues for COVID-19, and that he has not disclosed them.  Of all those sending us information, not a one provided anything more than links to social media and other blogs.   No matter the subject matter, we stand on the principle of Says Who and With What Proof.

While we do not have the personnel and resources to do a deep dive into Pritzker’s financial connections, we can confirm those items well within our wheelhouse.

Governor Pritzker suspended a specific portion of the Ethics Act.  That particular state law deals with the requirements of filing Statements of Economic Interests.  As it stands, the Secretary of State shows no filing for the Governor’s 2020 SEI document, which due to the Executive Order now has a new deadline of June 30th.  While he may have filed it, it is possible the SOS office has not uploaded it due to the current situation in the state. What has been uploaded is Pritzker’s 2019 SEI. We mention this information because it has been alleged he took this action to hide his connections, which they then point to as if that makes their theory factual.

What many are pointing to as conflicts of interest are three companies, Pritzker Group Venture Capital, PathGroup, and Cue Health.  A simple review of Pritzker’s 2019 SEI exposes that two of those companies in question are not listed, Pritzker Group VC and PathGroup.  Cue Health is on his 2019 SEI filing, which covers the prior calendar year, 2018.

While Cue Health has received a Federal contract for $13 Million dollars in March of 2020 for Rapid, Portable, Point-of-Care COVID-19 Test, we have no evidence that Pritzker still has stock in that company and won’t until his 2021 SEI filing which covers the prior calendar year, 2020, the year Cue Health received the contract. So for all of those telling us, there is a conflict of interest, please understand that while it may walk like a duck and quack like a duck, we can’t confirm the feet are webbed until future filings are complied with or he allows us to participate in the daily press conferences so we can ask the questions.  To date, we have been denied access to the daily press conferences even after multiple requests.

What we can confirm: 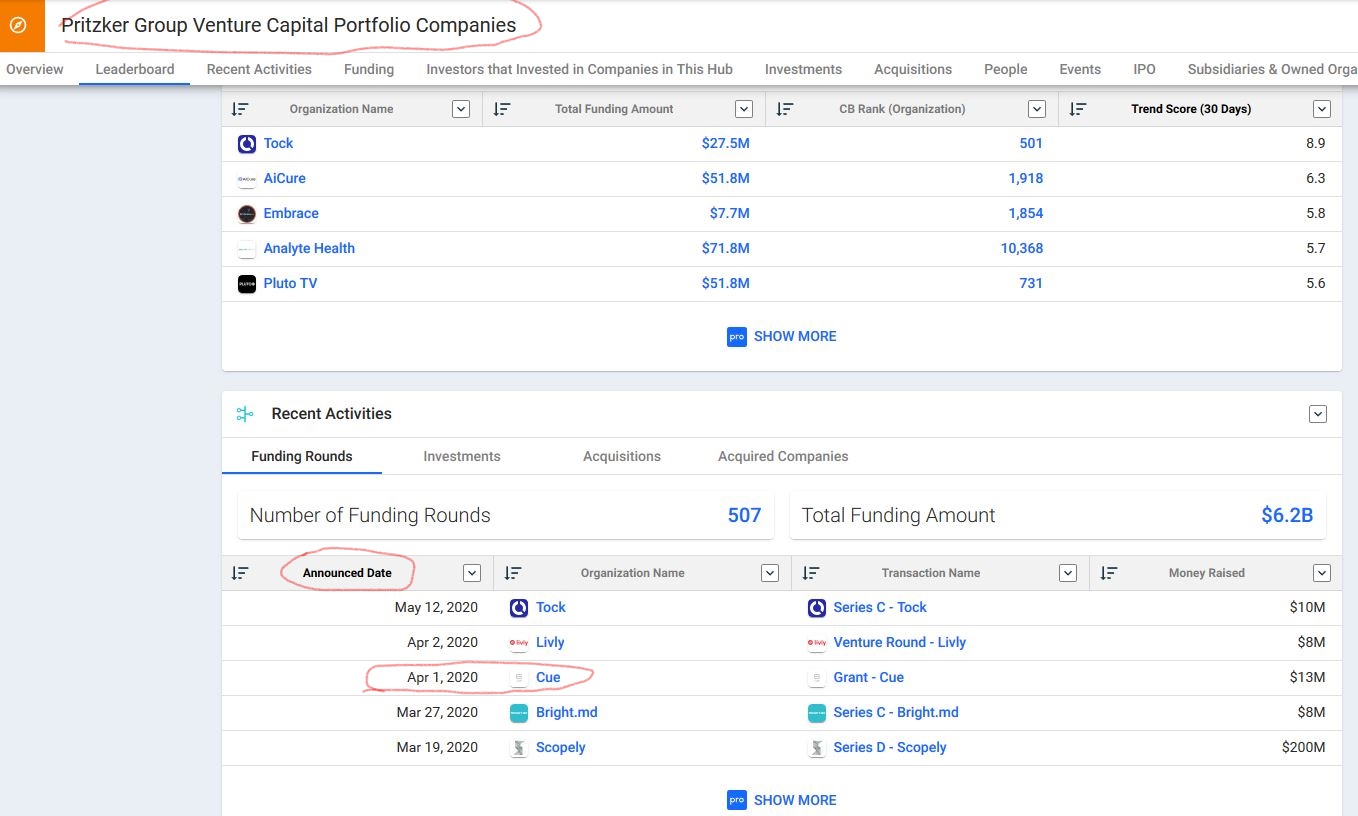 While Pritzker has placed his investments in a blind trust, it does not mean he still does not make money from them.  It simply means he is removed from making and from managing his personal assets according to the Chicago Sun-Times.  The still making money fact is confirmed through his 2019 SEI filing.  He made in excess of $1,200.00 from all of the companies listed on pages 10 and 11, which includes, Jabodon PT Company, the corporate Entity Name in which Pritzker Group Venture Capital operates. He also confirms making in excess of $1200 in relation to Cue Health and Jabodon PT Company as disclosed on pages 5 and 6.

The fact he is still making money does not mean his actions rise to the level of Official Misconduct.

(720 ILCS 5/33-3)
Sec. 33-3. Official misconduct.
(a) A public officer or employee or special government agent commits misconduct when, in his official capacity or capacity as a special government agent, he or she commits any of the following acts:
(1) Intentionally or recklessly fails to perform any mandatory duty as required by law; or
(2) Knowingly performs an act which he knows he is forbidden by law to perform; or
(3) With intent to obtain a personal advantage for himself or another, he performs an act in excess of his lawful authority; or
(4) Solicits or knowingly accepts for the performance of any act a fee or reward which he knows is not authorized by law.

As we see it, the Governor has a vast accumulation of wealth and business operations that may point to what some consider a criminal conflict of interest because of current activities dealing with COVID-19 and connected companies to future testing, however, we have not identified any of the required prongs of Official Misconduct as being violated.

While we do not agree with many of the actions of the Governor during the declared disaster, we urge people to not feed on the limited information being circulated with little if any actual analysis of the facts and application of Illinois laws.

There is little doubt the Pritzker empire will continue to make money from companies involved with COVID-19 matters.   Keep in mind, that doesn’t default to a crime being committed as so many have tried to convince us of.  For those who wish to insist he is breaking the law, please forward us the actual state law in the criminal code you think has been violated and will review the information.

I think the lesson to be learned is that with We The People finally waking up and paying attention, we need to learn what our laws actually say and how our courts interpret those laws before we jump to social media to hit “like” and “share” without any foundation or knowledge of the matter.  Those who fail to do the deep dive before dog-piling end up doing a disservice to our society in my opinion.

Facts matter, let’s get them before we convict any of our elected officials.