The current state of emergency declared by Governor JB Pritzker on March 9th has gone well beyond the 30-day limit set by law.

“Upon such proclamation, the Governor shall have and may exercise for a period not to exceed 30 days the following emergency powers;” 20 ILCS 3305/7

Considering this is Illinois where political figures historically, especially Governors, have little regard for the law, the fact remains the law is to be applied as written.

While the limits set by law are being ignored, people’s lives are being turned on their head, unless of course you’re a government worker or those protected by “act of God” clauses in their contract that ensures they continue to get paid.  Those in the private sector are not so fortunate and are facing financial ruin.

I have always believed common sense or basic logic is not so common for politicians.  Illinois Governor Pritzker and whoever is advising him has strengthened that belief.

All indications point to the highly populated areas as the ones where shelter in place “suggestions” make sense.  However it does not take a medical specialist to figure out after 40 days of such emergency rules you should not treat rural areas the exact same as those densely populated, but that is what the Governor is doing. 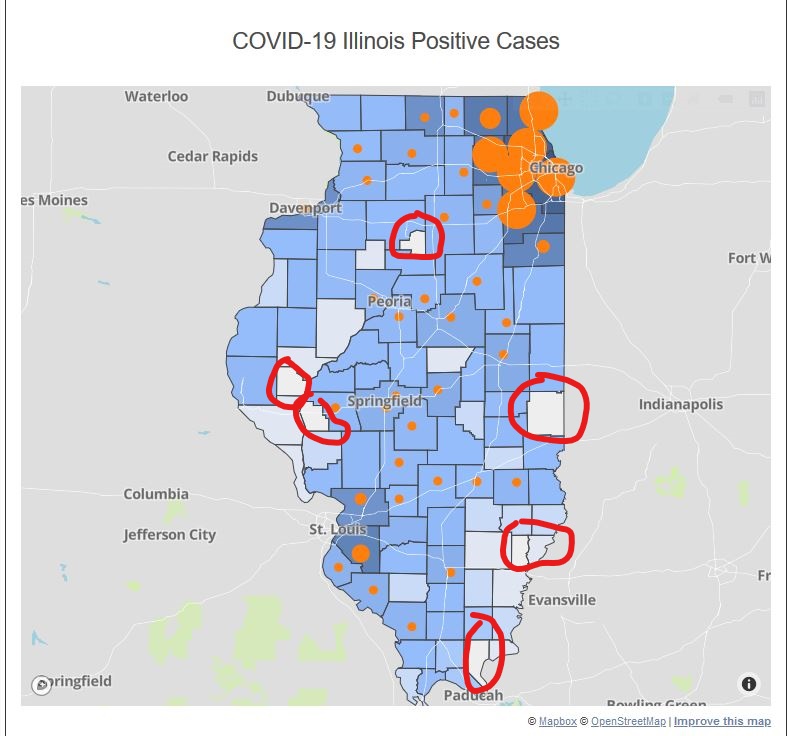 Illinois, as of this publication, has 6 counties that have yet to have a single case of COVID-19 according to the Illinois Department of Public Health (IDPH).

With 6 Counties having been basically locked down for well beyond the alleged incubation rate of the virus, why not suspend the rules imposed for those counties as a baby step to opening up this state?  Those same counties could be closely monitored for potential outbreaks and give valuable data to further assess the next move for the rest of the state.  As it stands, we find no medical or legal justification to keep those counties locked down under the same emergency rules as the rest of this state.

With 102 Counties in the state, sixty of them have less than twenty cases of COVID-19 identified as of this publication.  Of those sixty counties, forty-five have 10 cases or less identified of which many of those have already recovered.  We have hospitals with no COVID-19 patients in many parts of the state yet they also have restricted health care services to those who need it.

With so few numbers and little to no evidence of a pandemic level outbreak in those counties, we ask the same question.  What medical or legal justification is there to keep those counties locked down under the same emergency rules as the rest of this state?

While we understand the challenges in the higher populated area of the state, those areas must not dictate how the rest of the state is managed during this emergency.

Of interest, the state has refused to publish actual recovery rates, a figure that would help to make appropriate determinations on getting this state back in business.

We urge the Governor to recognize you don’t treat a patient (‘county’) for a sickness when they don’t have it, nor do you treat those with minimal signs of sickness the same as those highly infected.

In light of Pritzker’s extending his declared “state” of emergency through May 31st, 2020, we suspect Illinois courts will start seeing filings similar to those taking place in other states as it appears people’s rights are being trampled, especially in counties yet to have a single case.

In closing, we ask that the Governor provide the citizens with the actual plan for opening up Illinois so that people can get back to work and provide for their families.  The first step in doing that is to lift the orders for counties with zero case or even 10 or less.