The Algonquin Township Road District appeal in the Local 150 case was heard by the 2nd District Appellate Court yesterday.

The entire oral arguments can be heard at this link. 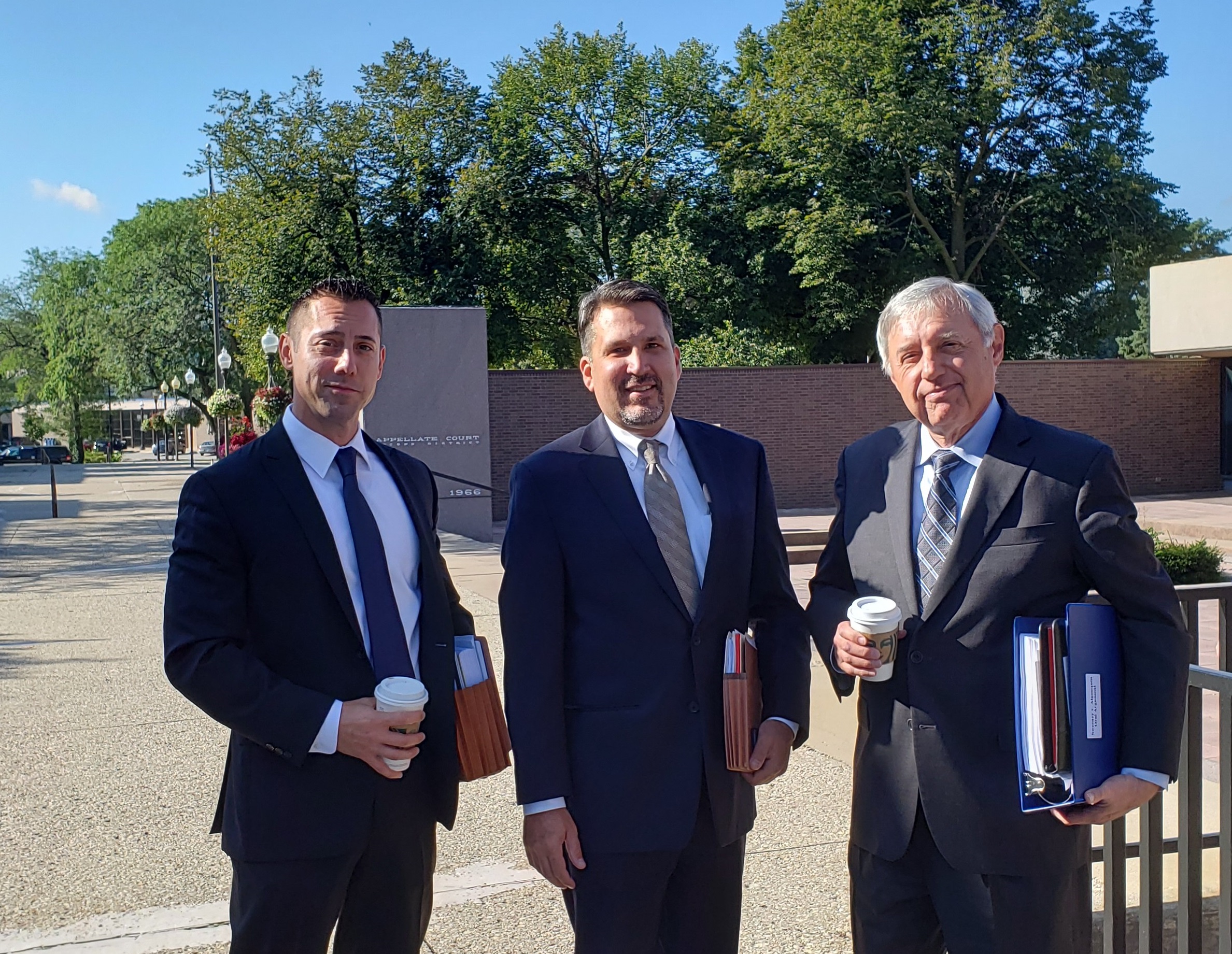 We attended the hearing and noted some key issues regarding first impression, which is a matter not having been before the courts before nor having any binding authority on the matter.

One of those issues is the Freedom of Information Act and whether a Township Road District is subject to its provisions.  Justice McLaren raised the first impression question to both arguing attorneys and it was clear, that matter is a first impression issue.  The importance of that point is directly tied to attorney fees that were awarded to Local 150 in the FOIA case against the Road District.  If the court follows the definition of “public body” found in the FOI Act, a Road District would not be considered a public body.

A legislative attempt was made this year to include Road Districts in the definition of a Public Body, however, it was never allowed to be brought for a vote in committee.   The Justices asked several questions on this point and one thing that was clear, there is no direct language found in the definition of “Public Body” in the FOI Act that points to a Road District.  While we all agree they are a unit of government, no language such as “all units of government” is found in the law.  The fact the law specifically provided a breakdown of who the law applies to and there being no standing authority on the matter for a Road District is what made this point a first impression matter.  In short, this court will get to make the authority on this point. If they side with the Road District’s plain reading of the law and application of statutory construction, the attorney fees awarded in the lower court would be reversed.  If they side with Local 150 by expanding the legislative definition with judicial action, then new law is created and Road District’s will be subject to FOIA and Local 150 attorney fees “may” be upheld.

Case law used to support the Road District’s argument outlines how the law is supposed to be applied.

“The lodestar of statutory construction is the legislature’s intent. Id. The best indication of such intent is the statute’s language, which must be given its plain and ordinary meaning. Sangamon County Sherrif’s Department v. Illinois Human Rights Comm’n, 233 Ill.2d 125, 136, 330 Ill.Dec. 187, 908 N.E.2d 39 (2009). Where a statute’s language is clear and unambiguous, it is unnecessary to resort to other rules of interpretation. Id. If a statute is ambiguous, however, we may consider extrinsic aids of construction to determine the legislature’s intent. Young America’s Foundation v. Doris A. Pistole Revocable Living Trust, 2013 IL App (2d) 121122, ¶ 25, 375 Ill.Dec. 802, 998 N.E.2d 94. A statute is ambiguous when reasonably well-informed persons could interpret the statute in different ways. Sangamon County Sherriff’s Department, 233 Ill.2d at 136, 330 Ill.Dec. 187, 908 N.E.2d 39.”

As we understand the argument before the court, Local 150 used in-house counsel and did not incur any legal fees because of the FOIA submitted and litigated. To simplify, if there was no FOIA ever sent, those same in-house attorney’s still get paid.  The case cited was clear on this point.

“Accordingly, we hold that the reasoning of Hamer prohibits a not-for-profit legal organization from being awarded legal fees that were not actually incurred in pursuing an FOIA request on the organization’s behalf. Uptown is not entitled to fees under these circumstances.”

The other issue before the court was the matter of an outgoing elected Highway Commissioner binding the hands of the next elected Highway Commissioner.  In this case, the outgoing elected official entered a 5-year contract with local 150, essentially binding the hands of the newly elected official.  Long-standing case law on similar matters is found in Edgar vs. Millikan where the Illinois Supreme court held such action of binding the hands of future officials improper unless the law expressly permits it. (Millikin v. Edgar Cty., 142 Ill. 528, 533 (1892), Cannizzo v. Berwyn Twp., 318 Ill. App. 3d 478, 482-83 (1st Dist. 2000), and Grassini v. DuPage Twp., 279 Ill. App. 3d 614, 620 (3d Dist. 1996))

A good read on the topic of binding hands of future officials is currently being litigate in the Federal Courts in the College of Dupage v. Robert Breuder case.  Item #2 is where the College’s arguments on the matter begin and can be found at this link.

The concept of not allowing a board to tie the hands of a future board or officials is pretty simple to understand and the concept lies with the fact voters have a right to vote elected officials out of office, which allows the voter’s voice to control their government. Allowing an elected board or official to enter into agreements that totally bind the hands of the succssor takes control away from the voters as the newly elected officials are unable to exercise their legislative authority.

Short of legislative authority, we are not sure how an elected official’s power to set compensation of his employees can be stripped from him for his entire term.  An example of such legilsative permission would be School Boards being given the power to enter into a 5-year contract for a Superintendent.  The law specificaly allows that, thus the legislation has given permission for the binding the hands of future elected officials.

We have found no language in the Highway Code that permits a Highway Commissioner to bind the hands of his replacement.

The Fair Labor Relations Act which was cited to during oral argument states:

(5 ILCS 315/21) (from Ch. 48, par. 1621)
Sec. 21. Subject to the appropriation power of the employer, employers and exclusive representatives may negotiate multi-year collective bargaining agreements pursuant to the provisions of this Act.
(Source: P.A. 83-1012.)

We believe this may too be a first impression matter as it relates to applying the FLR Act to a 5-year contract for a Road District.  Multi-year is not defined in the statute and while we agree a 5-year contract would be a multi-year contract, how does the court apply established case law on binding hands of future elected officials?

When the courts provide their ruling we will update accordingly.