We finally received our FOIA responses from the Illinois State Police in reference to the collision with an Edgar County Sheriff Deputy and DUI charge against Stacey Adams on April 17, 2019.

We would also like to note that these are merely police reports, and a person is presumed innocent unless and until proven guilty in a court of law.

According to the report, Adams was observed by witnesses as swerving, and crossing the center line and fog line prior to turning into the path of an Edgar County Sheriff's vehicle operated by Deputy Rhoads. The officer indicated she had the smell of consumed alcoholic beverage and bloodshot eyes while he talked to her.

As far as the DUI charge, according to the police report (page 12), Adams had a .23 BrAC when tested with preliminary breath testing equipment.

The legal limit in Illinois is .08.

The Court confirmed a statutory summary suspension of her drivers license on May 10, 2019.

She also failed the field sobriety tests given in the Paris Police Department parking lot.

During her June 27, 2019 court appearance, Adams pled Not Guilty and demanded a Jury trial.

Pre-Trial is scheduled in August.

The police report is below the following videos: 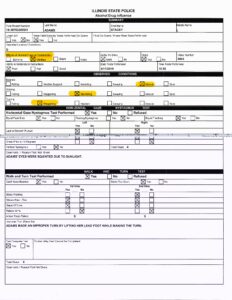