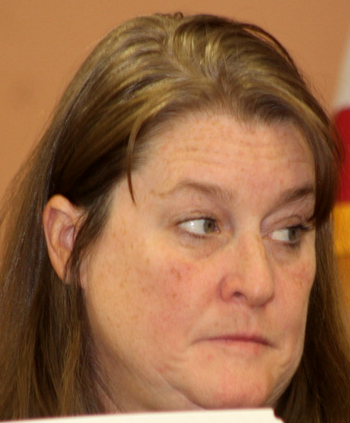 Algonquin Township Clerk Karen Lukasik is no newcomer to Freedom of Information manipulation and games as she is the key reason for our initial 16 count FOIA lawsuit against the Township which is still moving forward as they have yet to produce requested records.

In November of 2017, Lukasik was facing quite a bit of scrutiny over her actions to include being sued and numerous public questions regarding her possibly being related to Bob Miller, the former Algonquin Township Highway Commissioner.  Her social media response to that criticism is now a key subject of FOIA violations as well as further exposing the hypocrisy of Lukasik.

We submitted an FOIA request seeking the following.

According to James Kelly, the FOIA officer Charles Lutzow states:

"The Township has no records which are responsive to your request. Karen Lukasik is not a
public body and her personal Facebook "Karen Lukasik for Algonquin Township Clerk" account was not
prepared for, used by, received by, possessed by or controlled by a public body, in this case, Algonquin
Township."

See how the game gets played?

I responded to the Attorney with the following, of which to date we have received no response.

"Your FOIA response is past the obligated time frame.  I will consider the response an improper denial.

It appears your trying to play games with the title by inserting a word that WAS NOT in my request. (Karen Lukasik “for” Algonquin Township Clerk)

Please provide the requested information and a proper response.

Below is a screen capture of the very Facebook Page that was set up and used as the Township Clerk's official page and you can clearly see, there is no three letter word "for" in the name of the Facebook Page as claimed by Lutzow and his attorney James Kelly.   So clearly the response to our FOIA was a lie. 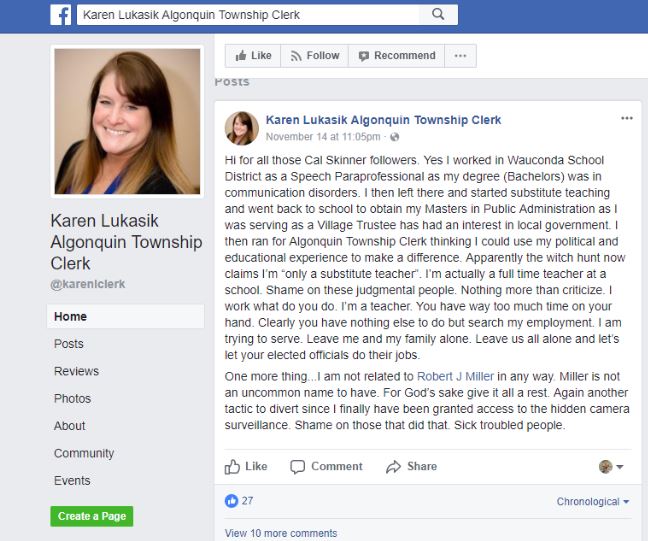 Note the last paragraph and the statement made by Lukasik.

"Again another tactic to divert since I finally have been granted access to the hidden camera surveillance.  Shame on those that did that.  Sick troubled people."

Yep, she gained access to the video surveillance, and what people did not know that day is that it was Lukasik going through the Supervisor's office without their knowledge to include allowing a private citizen free access to a public officials office and desks, all without their permission.

Lukasik has denied having any electronic images of the records she took pictures of and claims she has no record that she took out of the office, all in clear dispute of what was captured on the video surveillance.

So why Lukasik thinks it is others that are "Sick Troubled People", we ask the readers to question, who is really sick and troubled?

Considering the Township lied on the FOIA response and refused to address the actual records requested it appears this group prefers litigation, of which depositions are sure to follow and it is clear, Lukasik wants no part of depositions, as pointed out in this article.

While she considers others "sick and troubled people", she has no problem allowing non-public officials of the township go through people's desks in secret and then deny key records existence even though the video proves otherwise.  Couple that with the new self-enrichment efforts and we believe it may not be others that are sick and troubled as Lukasik has claimed.

We urge the citizens of Algonquin Township to demand the immediate resignation of Karen Lukasik.

You can review the most recent Lukasik articles here, here, and here.