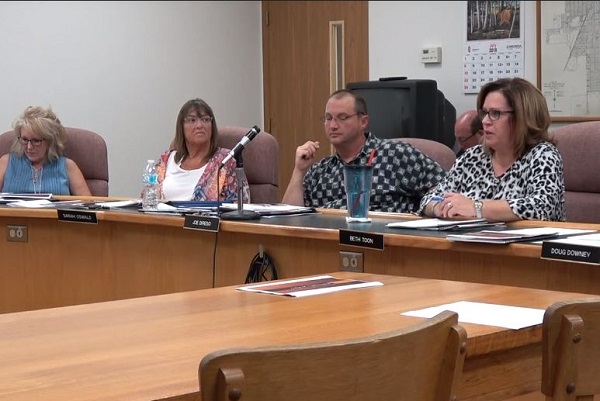 During Tuesday's Carlinville City Council meeting, Alderwoman Beth Toon had a chance to set the record straight from last month when Attorney Dan Schuering told her she didn't know what she was talking about, and he called us (ECWd) political terrorists.

When it was her time to speak to an agenda item, Toon read a quote from the newspaper, which quoted Schuering as saying the meetings in question never happened (these two meetings are part of our FOIA lawsuit) and Beth Toon was the only one worried about them.

Toon said she had a feeling "there was a big misunderstanding" about the meeting(s), she handed out a picture she took of one of the meetings in question and explained how she entered the room and was asked to leave because they were having a meeting and one of them told her to leave because he was advising his clients. She left the room, went to retrieve her camera, and returned to take the picture.

We have been informed the individuals captured in the picture are Carlinville Electoral Board members and Dan Schuering (the Attorney claiming no meeting happened).

Toon said the meeting did happen and that it is wrong to say otherwise.

Watch this part of the city council video below: