Over this past weekend, and since we had written about how Wesley Township is charging certain fees for the public to use its Township Park (in violation of the Township Code), one Wesley Township Trustee has been abusing her position by disseminating information, that in our opinion borders on criminal intimidation.

While extorting fees from park users, Trustee Kathy Kennedy decided it was a good idea to pass out a note to those at the park telling them to call her if they spotted the “Township Park Harassers” in the park and she would in return call the Sheriff’s Department.

This note is to the left, and we redacted the personal information before posting it.

This note included names, types of vehicles and descriptions, license plate numbers of those vehicles, and the street they live on. These two individuals have done nothing but exercise their right to public records and public meetings, and exercise their right to question their local government. For that, they are labeled as harassers by a township official.

This type of action taken by an elected township trustee acting under color of law as the alleged official fee collector for the township, is, in our opinion, intimidation by a public official.

This special carve-out states that intimidation is when someone “takes action as a public official against anyone for anything, or withhold official action, or cause such action or withholding. Subparagraph (a)(5) would probably apply also.

For the abusive actions taken by Wesley Township Trustee Kathy Kennedy over this past weekend, we demand she resign her position as trustee and issue a public apology to the two individuals who were named in the note she passed out to park renters.

We ask the Township Board to immediately expressly prohibit such activity in the future and to issue an apology for Trustee Kennedy’s actions and for appointing her as the rent collector for a park that is supposed to be for the “free” use of the public. 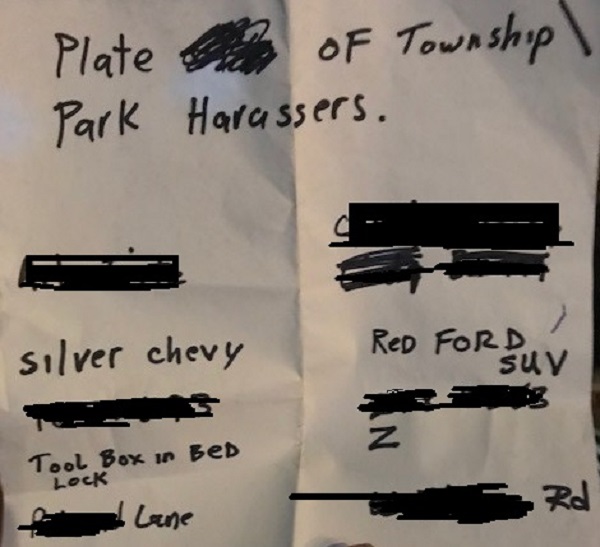