UPDATE from the ECSD:

At 1238 hrs a citizen found two subjects in the area around the Pleasant Hill Church. When law enforcement arrived the male subject took off running and a female subject was apprehended. The male was chased on foot and was able to escape. Further investigation revealed the Pleasant Hill Church had been burglarized. The female is in the Edgar County Jail facing Burglary and Trespassing charges. The male was identified to be Benjamin Hornbrook, 7/4/91, and was wearing a black t-shirt and blue jeans. He was chased NE from the cemetery. A local farmer arrived very quickly with a drone and our K9 unit arrived but was not able to apprehend Hornbrook.

We encourage everyone in the area to lock houses and vehicles. Please call in any suspicious activity.

If you are in the Pleasant Hill Church or Kansas area, Edgar County Sheriffs Dept is looking for a white male mid 20's with brown hair approximately 5"7' 145 lbs wearing blue jeans and a white t-shirt. Please notify the Sheriffs Department if you see him or anything that looks suspicious. Do not try to apprehend!

The picture below was taken just prior to the manhunt where they were talking to a landowner who caught them trespassing.  In that photo, just prior to the police showing up the person was wearing a black t-shirt. 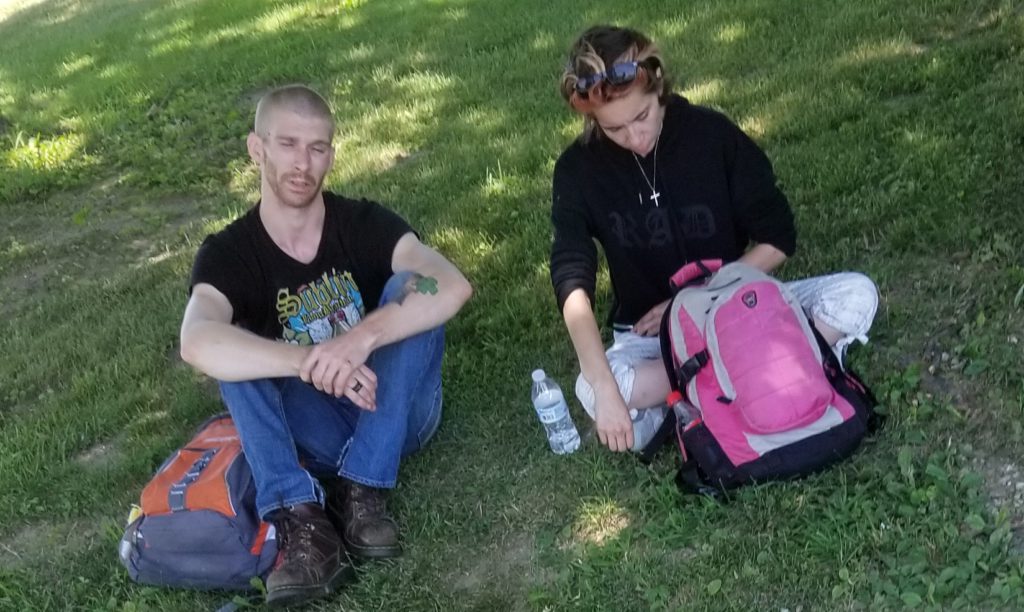 ECWd Photo before the male ran away

There were two Deputies, one with the K9, and the Sheriff on the scene. Arriving first was the Kansas (IL) Police Department with one vehicle.

As of this publication, the male took off running into the wood line and is still at large, the female was taken into custody outside the Pleasant Hills Church and transported to the Edgar County Sheriff's department in Paris, Illinois.