Today, the Clark County Board passed a Resolution expressing its displeasure with the Illinois State Legislature's continuous attacks on the Second Amendment Rights of its citizens.

Similar to Effingham County who recently adopted a Gun Sanctuary Resolution, the Clark County Board adopted a similar Resolution but leaving out the "Sanctuary" language.

Read the resolution below: 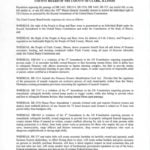 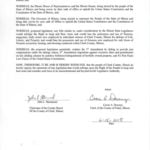 JG-TC.com has an indepth article on this Resolution, and can be read (here).