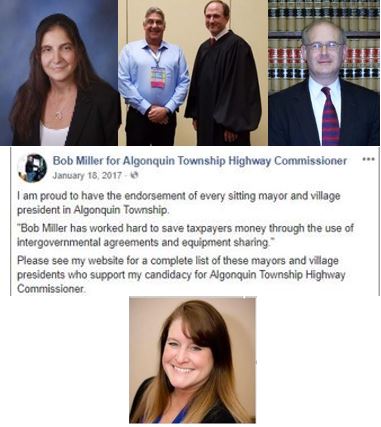 When we see such clear evidence of wrongdoing with taxpayer money and no one is charged, more often than not, local relationships hold the clues as to why we have little accountability at the local level. That old saying you don't crap where you eat has become the standard in Illinois and Mchenry County appears to fall in line with the rest of the state.

Most know Judges talk, State's Attorneys talk, Lawyers talk, Village and City Mayors talk. The politics of Illinois knows no bounds when it comes to matters of influence peddling and protecting the status quo through all that talking behind the scenes. The key to breaking this chain, known as the Combine in Illinois, is exposure.

Connect the dots as it relates to Algonquin Township:

All of these people have an influence to some degree in the politics of McHenry County, with maybe the exception of Karen Lukasik who is simply unable to manage either her own finances or the office of Township Clerk.  With so many dots connected so close to Robert Miller, isn't it fair to ask, what kind of influence do all these people have when it comes to possible criminal indictments against Robert Miller and others at the Algonquin Township Road District?  How many conversations have taken place over the last year on what should or should not happen on this matter?  Oh to be that fly on the wall!

We contend that this entire Algonquin mess is too politically sensitive for local prosecution.   When alleged criminal acts began to surface, the local Sheriff refused to investigate due to his political connections with those who would be investigated.  We understand the State Police were of little assistance due to resource allocation.  That leaves the State's Attorney's office to become both investigating agency and prosecutor.  A line that can only be walked with a very limited exception on this type of case. Cross that line and the whole case gets thrown out.

Prosecution of public corruption can be a two-edged sword.  On one hand, you're the citizen's hero for protecting the taxpayer while on the other hand, you become the arch enemy of the political party of those charged, a sure self-destruction of future political favor if that is your own party, which in this case it is.  Putting local politics and friendship aside may well be one of the hardest things a prosecutor has to do.

Considering there is yet another civil court filing alleging Breach of Fiduciary Duty, Conversion, Constructive Fraud, and an Accounting, it is clear there are legal minds that see the same thing we are seeing.

If the local State's Attorney selects to use his prosecutorial discretion and not prosecute, we predict he will be a one-term State's Attorney.  We also predict if he does move forward with a truly aggressive prosecution, it will be a game changer to his political career as well as the career's of numerous other corrupt public figures in McHenry County...........like maybe the Crystal Lake Park Board members giving themselves compensation in violation of the law?