Village of Orland Park Public Employees Squander $2,000+ on Private Party for Themselves

The Village of Orland Park is something of a modern-day Peyton Place for watchdogs and observers of bad behavior by public employees: there is always something afoot, especially when it comes to wasting public funds on food and merriment for public employees. This time, the Village has been caught shelling out more than $2,000 for a catered private party for its Village employees…not long after the Village claimed it had to cancel special events such as the local farmers’ market, movies in the park, and Chili Cook-off because the Village is experiencing diminished commercial revenue and faces a budget shortfall. So special events that the public enjoyed have been canceled due to lack of funds…but there was still money to burn for Village employees to throw themselves a $2,000+ party in December.

This presents a good opportunity for residents of all communities to question the value or sense of public bodies continuing to throw themselves “holiday parties,” particularly when units of local government complain about tight budgets and insist they need to eliminate events or programs that the public enjoys. If cuts to the budget are needed, the very first thing to go should be private parties for public employees. Before a single farmers’ market or movie in the park is canceled, all parties that are thrown exclusively for public employees should be eliminated. After all, the public’s money is being used to foot the bill so that money should only be going to events that the public can actually enjoy.

Many decades ago, well-intentioned public officials began the tradition of holding Christmas parties for public employees, back in the days when these events could actually be called “Christmas parties.” This followed the example of private companies, which also held office Christmas parties for their own employees. These were annual events where people would gather and eat together (and drink) and celebrate Christmas cheer with their work colleagues as a parallel to the Christmas celebrations these people would have with their own families. Due to the epidemic of Political Correctness, most public entities have long-since stopped calling these events “Christmas parties” and now call them generic “holiday parties” (so as not to potentially offend the small minority of people who would be upset by the word “Christmas”). They eliminated the “Christmas” from these events but refused to give up the “free” food and time away from their desks that these parties involve.

This would be like hosting an annual Super Bowl party at your house for many years where you invite all your friends and neighbors over for beer and food and football-themed good times…but then decided at some point to ban anything football-related and instead call it a “January or February party.” What’s the point of even doing the party any more if you ban the thing that started your party’s tradition in the first place?

Shouldn’t we as a society question whether it makes sense to continue the “free” food and wasted work hours for public employees if these events are decidedly no longer “Christmas parties”? Only a grinch would decry a Christmas party…but a generic “holiday party” is another matter altogether. Most public employees get double the holiday pay of private workers. In Orland Park, for instance, public employees are given Christmas Eve, Christmas Day, New Year’s Eve, and New Year’s Day off work as paid holidays; this is in addition to Village employees also receiving numerous other federal, state, and local holidays off (with pay!) throughout the year when private workers are not afforded all of those same paid days off.

Shouldn’t all of those extra days of paid “holidays” suffice and preclude the need to spend $2,000 in taxpayer funds on a “holiday party” (for the public employees who already received FOUR PAID DAYS OFF in December/January)?

Invoices and receipts show that the Village of Orland Park ordered more than 30 pounds of Italian beef and 6 large trays of something called “chicken nuccio” with brushetta, salad, potatoes, and heaps of sugary sweet desserts to gorge public employees on Friday, December 8th. All of these public employees remained on the clock during the “holiday party,” collecting their generous salaries (with platinum-plated benefits) while they were stuffing their faces with the “free” food (that the public paid for). Taxpayers were not invited to this gluttonous event but were stuck with the stomach-turning bill.

Meanwhile, special events that families cherished attending in Orland Park were canceled because the Village claims it has run out of money and can no longer afford to host those farmers markets and movies in the park and other open-to-the-public happenings. Yet there seems to forever be enough money to pay for public employees to be on the clock and strapping on a $2,000+ feedbag. Why is that okay?

This kind of thing is probably happening in every locality around Illinois and it will continue to happen as long as the public stays incurious and remains complacent about it. FOIA your local government’s “holiday party” spending and see how much taxpayer money was wasted in December where you live. When will enough be enough? 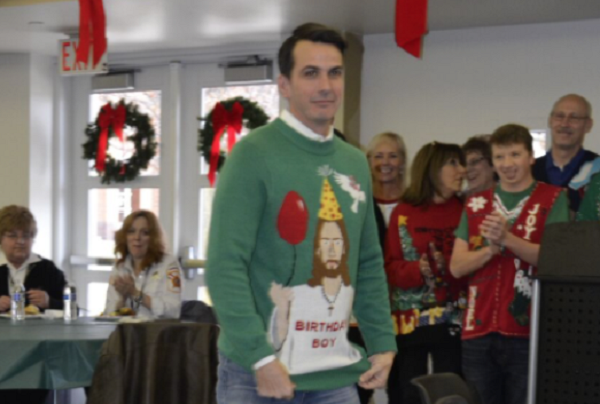