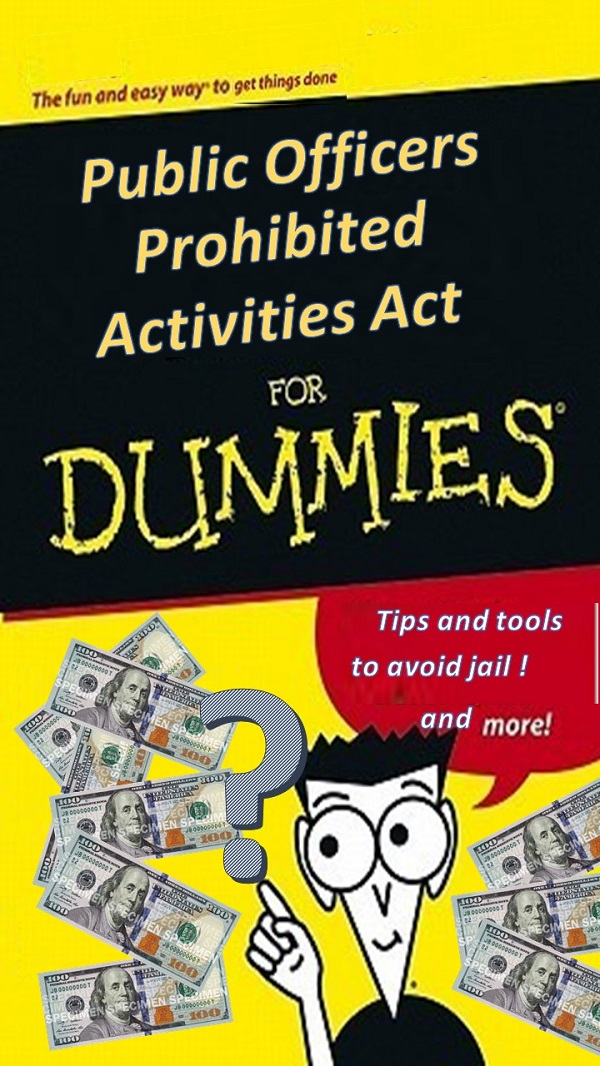 We’ve seen ignorance, but never to this level. Maybe that’s why they call it “practicing” law…

In another public records release (FOIA), I came across this letter from Fosterburg Water District’s (“FWD”) Attorney, Mr. Kenneth Balsters, written to the Madison County Board Chairman, which purports to clear the way for FWD Trustee Aljet to continue committing alleged felonies by having prohibited financial interests in contracts with the district.

The bottom line here, is that the performance of work and receipt of payments between Aljets Automotive, Inc, and the Fosterburg Water District is in violation of both the Water District Act and the Public Officer Prohibited Activities Act, regardless of what this attorney is trying to say.

First, Balsters wrongly claims the Public Water District Act is only a general prohibition that needs further clarification by looking to the Public Officer Prohibited Activities Act. The Water District Act prohibits ALL financial interest, direct or indirect, with district trustees. It is specific to a water district, similar to how a Municipal Officer may have certain interests according to the Municipal Code, and how the Park District Code never mentions financial interests, and the Airport Authorities Act allows IDOT to demand a hearing when financial interests are discovered. The Public Officer Prohibited Activities Act (“POPAA”) is not the exclusive Act related to financial interests in contracts, therefore it should be read to apply only to those situations in which a statute to a specific public body does not have any financial interest provisions contained within it, or when it explicitly further restricts or expands existing statutory prohibitions.

The Public Water District Act prohibits ALL financial interests in contracts, work, or sales to the district from a trustee – appointed or elected. Case Closed.

However, assuming, arguendo, that Balsters is correct in his thinking, and a water district must look to the POPAA for clarification (which they do not), here is our analysis of the Aljets Automotive payments as applied to the POPAA – you will see the POPAA also prohibits Mr. Aljet’s financial interests:

Attorney Balster says run along, nothing to see here…

“In reviewing this matter with the FWD manager and secretary, it is indicated the provisions of 50 ILCS 105/3(b)(2) have been strictly adhered to when involving any approved contracts or payments to Aljets Automotive, Inc, In essence, the amount of any one contract cannot exceed $2,000, and the aggregate payments in any one fiscal year cannot exceed $4,000.

Let’s break it down to better understand what this paragraph actually means.

Section 3 is the Section about Prohibited Interest in Contracts

Paragraph (b) of Section 3 allows certain interests in contracts, but they are “subject to the following provisions under either paragraph (1) or (2)” – which means that each and every provision within subparagraph (2), in this case, must be complied with:

A. “the award of the contract is approved by a majority vote of the governing body of the municipality provided that any such interested member shall abstain from voting; and“

Aljet FAILS this test: This paragraph cannot apply to a water district trustee as it clearly states the “the governing body of a municipality” – a water district is not a municipality. Further evidence of this is the fact that previous paragraphs in the POPAA specify with clarity who is subject to its requirements, it mentions Municipal or County officer (3(f)(1 and 2))), No person holding any office (3(a)), Township Supervisors and Trustees (2a), Alderman of a city or member of the board of trustees of any village (2), Municipal board member (1.3), County board member (1.2), Member of a county board (1.1), County board (1),  finally, it names all of them, individually in Section 4.

However, assuming, arguendo, that Aljets does pass this first test (which he does not) – let’s look at the other 4 paragraphs to see if he can pass them:

Aljet PASSES this particular test if paragraph “A” did not apply.

C. “the award of the contract would not cause the aggregate amount of all such contracts so awarded to the same person, firm, association, partnership, corporation, or cooperative association in the same fiscal year to exceed $4,000; and“

We are not certain he meets this requirement, but will give him the benefit of doubt and assume he does – provided paragraph “A” does not apply.

D. “such interested member publicly discloses the nature and extent of his interest prior to or during deliberations concerning the proposed award of the contract; and“

Aljets FAILS this test because the meeting minutes do not reflect his public disclosure of the nature and extent of his interest prior to or during deliberations concerning the payment. this would be sometime during the Motion, Second, and Voting on the Motion. However, assuming, arguendo, that Aljets did publicly disclose it and the secretary just “forgot” to type it in the minutes for the past 10 years, AND that paragraph “A” does not apply, what about the last remaining requirement?

E. “such interested member abstains from voting on the award of the contract, though he shall be considered present for the purposes of establishing a quorum.”

In total, Aljet FAILED at least 3 of the 5 requirements set forth in the Public Officers Prohibited Activities Act in order for him to do business with the water district in which he is an appointed trustee to.

The other paragraphs to look at in the POPAA to see if he can be financialy interested as a water district trustee are: Section 3(b)(1) – but he fails that test also because it requires a less than 7 1/2% ownership AND the interested party (Aljets) be a member of a municipal government body. Or even paragraph 3(b-5), but it requires less than 1% ownership AND the interested party be a member of the governing body of a municipality, advisory panel, or commission.

Since all of the Sections and paragraph allowing certain exceptions to financial interests in contracts do not apply to Aljet, and IF the POPAA must be consulted to clarify prohibited activities of a water district trustee, then they can only look at Section 3(a) – which still prohibits his financial interest in contracts. Section 3(1) prohibits what Aljet did, Section 4 describes the penalties for each and every payment received by Aljets Automotive.

NOTHING else applies – except for Section 4, which describes violations of the Public Officer Prohibited Activities Act as Class 4 Felonies and ejection from Office upon conviction.

Look for our new, yet to be published book: PUBLIC OFFICER PROHIBITED ACTIVITIES ACT FOR DUMMIES

In the meantime, this site is operated solely thru donations. Please help us keep shining the light on local governments by donating at the link below: