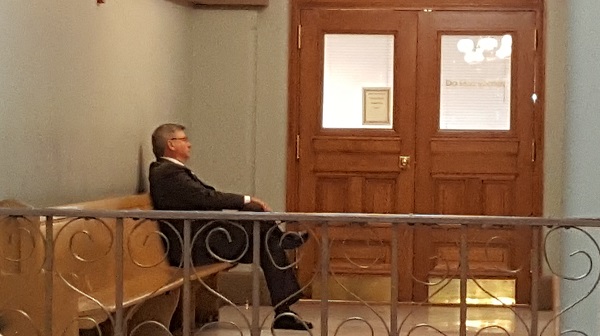 Kesler waited in the hallway until his case was called, at which time he entered the courtroom standing quietly next to his defense attorney.

The Court confirmed a Jury Trial to be conducted on November 2, 2017 in Superior Court.

There was a short discussion of a negotiation which the prosecutor is supposed to submit today.

Kesler then waited in the hallway again for his attorney after his hearing, in which a little discussion occurred, and Kesler then left the courthouse.

Kesler is a former Edgar County Airport Board member who was appointed to that position by the Edgar County Board. He resigned in October 2015 (click here) after I provided him with documents reflecting what I suspected he was doing.

Later, in June of 2016 while trying to impress upon Vigo County of what one of their employees were allegedly doing, the Vigo County Attorney, Michael J. Wright, claimed FOIA requests were harassment (click here).

Kesler was arrested and charged on June 22, 2017 with 2 Counts of voting outside precinct of residence, both Class D felonies in Indiana, and he posted Bond (click here).

Kesler is reportedly on unpaid administrative leave from the Vigo County EMS pending outcome of the trial.

Watch him leave the courthouse this morning: