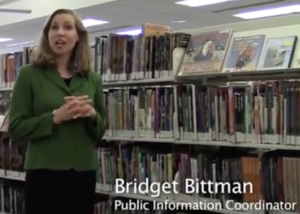 Recently, keen eyes noticed a curious change on the Orland Park Public Library’s official Facebook page, which had previously hosted numerous videos dating back to 2014 that the OPPL had paid local videographer Maqbool Rashid to produce (at a cost to taxpayers of at least $4,350, according to documents obtained via FOIA request in July 2017). As of this writing, the videos in question have all disappeared from the OPPL’s social media site, with the Library refusing to explain what happened to them or why they were taken down after so much taxpayer money went to Rashid’s company, “Cover Chicago,” to film and edit them.

These expensive-to-produce video segments were commissioned by the OPPL’s disgraced former spokesman Bridget Bittman during her employment at the Library (which ended ignominiously in July 2015, shortly after a defamation lawsuit was filed against Bittman for allegedly making knowingly false statements to the news media in an effort to harm one of the OPPL’s critics). Many of the newly-disappeared videos featured Bittman mugging for the camera, interviewing OPPL patrons about their thoughts on random topics, giving ad hoc tours of the Library, and spotlighting various OPPL events that Bittman intended as some sort of marketing campaign. The videos were seemingly posted to Facebook and maintained on that social media site by Bittman, whom the OPPL identified in court documents as the sole administrator of its Facebook page until her abrupt departure.

Recently, the OPPL’s Facebook page was seemingly purged of all content commissioned or posted by Bittman, with only content remaining that was created or posted by Bittman’s successor in the role of OPPL spokesman. Such a purge of public work product is not common for Illinois public bodies, particularly when so much taxpayer money was invested in producing that work product. The videos that were removed without explanation from the OPPL’s social media site are arguably part of the OPPL’s (and by extension, the Orland Park community’s) history. There appears to be no public benefit to erasing these videos from the OPPL’s page and making them unavailable for public viewing, as Facebook has no limit to the amount of videos that can be posted (which means no argument can be made that the videos were removed as a necessity so that new ones could be uploaded; in this matter, the OPPL had more than enough room on Facebook to retain the old videos while adding as many new videos as it pleases).

According to invoices submitted by Maqbool Rashid in the form of his “Cover Chicago” videography company, some of the videos produced during Bittman’s stint as OPPL spokesman include:

FOIA documents show that Bridget Bittman’s initials appear next to most of these videography expenses from early 2014 to the summer of 2015, with Library Director Mary Weimar signing-off on other commissions made while Bittman held the Public Information Coordinator position at the OPPL. The total for video production services billed to the OPPL during this time period is at least $4,350.

Residents of Orland Park are thus left to wonder why a public body would spend so much money filming and editing videos for its spokesman to post to Facebook, only to then erase those videos from social media some time after that spokesman leaves her position. Currently, the OPPL features just 22 videos on its Facebook account, all filmed while Bittman’s successor (Jacqui Boyd) has been the new Public Information Coordinator for the Library. With Maqbool Rashid’s established rate being $250.00/video, this means the OPPL has invested at least $5,500 in further video production since Bittman resigned her position.

What is the point of spending thousands of dollars on a professional videography service to capture events at the Orland Park Public Library on film and post them to social media if the public is not allowed to continue viewing these videos forever? At bare minimum, the “Bette Davis/Chicago Wolves” event is an intriguingly-titled video that no doubt many would like to see. (The possibilities for public entertainment inherent in the presumed spectacle of a former two-time Academy Award-winning actress somehow cavorting with either lupine alpha predators or athletic hockey players are infinite…and sounds like there is truly something for everyone in that one clip alone.) The concerts filmed would delight the public forever with musical clips and the gardening tips are evergreen, with no expiration date for their usefulness.

So why did the OPPL squander at least $4,350 in removing video content from its site and making those videos unavailable to the public when it has since invested at least an additional $5,500 in hiring the same videographer to create ongoing content for the OPPL’s social media account? Wouldn’t the OPPL have almost twice the amount of such content available for the public to now enjoy if it had kept Bittman’s work product available?

As usual, the OPPL Board of Trustees was offered an opportunity to explain the thinking behind removing the Bittman-era videos and arguably wasting the thousands of dollars spent on them, but they offered no reply.