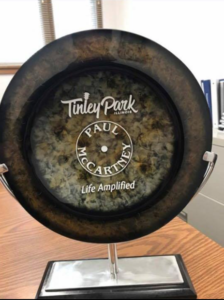 As an update to an earlier report on Tinley Park Mayor Jacob Vandenberg’s alcohol-fuelled public spectacle after the July 26th, 2017 Paul McCartney concert, a Freedom of Information Act (FOIA) request has now produced an ethics complaint filed against the Mayor on August 11th, 2017.

The complaint asks for the removal of Mayor Vandenberg from office and cites Village Municipal Code 39 as authority. The complaint takes issue with the Mayor’s documented misuse of his elected title to order police traffic officers to allow him to move cones blocking an intersection so that his large white party bus could proceed onto a closed street in the opposite direction of the flow of egress out of the Hollywood amphitheater that night. A public official in Illinois is not permitted to use his elected title to circumvent public safety or traffic management instructions by the police. Nowhere is it written that shouting “Mayor coming through, make way for the Mayor!” allows a suburban village mayor to put on the airs of the Emperor of Japan. This is not how America works.

As detailed in the complaint, Village Code Section 39.05 (Impartiality and Special Treatment), prohibits Village officials (including Mayor Vandenberg) from being granted any “special consideration” by other Village officers (including the police). It can be argued that Mayor Vandenberg asked for and received “special consideration” on July 26th when he was allowed to move traffic cones, deliberately interfered with traffic management, and disobeyed clear and lawful instructions from peace officers (all of which was documented by a half dozen police statements). It is hard to imagine a scenario where an ordinary private citizen was doing what Mayor Vandenberg admits to doing that night and the police not arresting that ordinary private citizen for multiple disorderly conduct (or worse) violations.

Village Code, Section 70.04 (Obedience to Police; Compliance) is particularly instructive here: “Members of the Police Department are authorized to direct all traffic…It shall be unlawful for any person to fail or refuse to comply with any lawful order, signal, or direction of a policeman.”

Village Code Section 70.23 (Interference with Official Traffic Signs, Signals) states that, “No person shall, without lawful authority, attempt to or in fact alter, deface, injure, knock down, or remove any official traffic-control device, or any railroad sign or signal or any inscription, shield, or insignia thereon, or any other part thereof.” The language here makes it clear that the ordinance was written in such a way to purposely include traffic cones as a “traffic-control device.” That word, “device,” is a more inclusive umbrella than “sign” would have been since the police typically use cones and movable barricades as temporary traffic-control devices when blocking off roads to divert traffic as needed. In the matter at hand, Mayor Vandenberg had publicly admitted that he altered the placement of traffic-control devices on July 26th and removed them from their original positions so that his party bus could head west on a closed street when all other motorists were prevented from traveling in that direction.

Village Code Section 72.081 (Driving on Closed Streets) seems to apply more to the driver of the party bus than to Mayor Vandenberg himself, as it’s alleged by no one that the Mayor was ever behind the wheel of the vehicle that night. An argument can be made that the party bus’s driver should have been cited by the police for choosing to drive down a street that was “closed to traffic and so marked by signs, barricades, or otherwise.” While it can be argued that Mayor Vandenberg altered and removed the traffic-control devices put in place to close that street, it was still the party bus’s driver at the wheel, who can plead no ignorance of the law due to the requirements of obtaining his license to drive that party bus for hire.

The ethics complaint seeks a full and independent investigation and provides attached exhibits in the form of the previously produced police statements that detail Mayor Vandenberg’s apparent intoxication and abuse of his title on July 26th.

An interesting new tidbit about the evening appears to be the allegation that Mayor Vandenberg managed to get himself backstage in an effort to meet Paul McCartney by announcing himself as the Village Mayor and bringing with him a plaque to present to the former Beatle. In his brief apology to the public for his embarrassing actions, Mayor Vandenberg asserted during a Committee of the Whole meeting that he was a private citizen on July 26th, merely attending the concert with tickets he paid for himself (despite the multiple police reports stating that he repeatedly used his title of “Mayor” when ordering around the traffic management officers). The presentation of the plaque to McCartney adds a troubling wrinkle for Mayor Vandenberg, as clearly he was acting in the capacity of Mayor while bringing this questionable item backstage.

Postings on social media by observers of this mess have come to a consensus that it does not appear at this time that Mayor Vandenberg was successful in actually meeting Paul McCartney, but more likely was only able to bestow the plaque upon McCartney’s manager or another staffer. It is difficult to imagine a scenario where a world-famous performer (such as one of the last two surviving Beatles) with more than a half-century in show business would have room on his tour bus for a large plaque inscribed with his name (written inside a record) and the words “Tinley Park” and “Life Amplified.”

It will be interesting to learn how many taxpayer dollars were spent in purchasing this plaque because — as lovely a town as Tinley Park truly is — I suspect there is little chance of Paul McCartney moving his 18 Grammys, his Oscar (for 1971’s Let it Be), his Kennedy Center Honor, or even his MTV Award off their shelves to make room for this “Life Amplified” plaque from the Village of Tinley Park. It would have been smarter to buy locally-made snacks and present McCartney with a large gift basket of Tinley Park’s favorite treats so that he could have re-gifted that to his crew to snack on when they got back to their bus after the show.