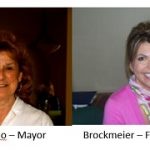 Demuzio, as Mayor of the city, directs the city attorneys and has apparently failed to direct the current attorneys in their responsibilities to comply with state law.

Brockmeier, as the City Clerk and FOIA Officer, is her duty to comply with the law, and since there has been no compliance, the FOIA Officer has failed to perform her statutory duties.

We have received information from three separate individual FOIA requesters showing the City of Carlinville has refused to answer their requests for public records. One was an anonymous request, one from some guy in South Jacksonville, IL., and another from a Paris, Illinois resident. All three have indicated to us that they have also filed a complaint with the Attorney General’s Public Access Counselor on Carlinville’s noncompliance. It looks like these requesters were looking for some of the same records I requested and never received.

Every resident of Carlinville should ask the Demuzio and Brockmeier what they have, that is so damning, that they have to keep secret from the prying eyes of the public. They should also ask, if “there is nothing to find,” why won’t they produce the requested records? The city didn’t even bother to ask for more time, which FOIA allows when compliance would create a burden on the public body – so by their failure to ask for more time, it is evident there is no burden.

Unfortunately, this will create more legal fees for Carlinville taxpayers to pay; the city attorney must have found a new avenue to create revenue for himself.

At some point, this will cease to become a simple non-compliance with the Freedom Of Information Act issue, and morph into possible felony concealment of public records as provided for in the Local Public Records Act, which might be considered the “sister” statute to the FOIA, only that the LPRA provides for criminal penalties.

[50 ILCS 205] Sec. 4. (a) Except as otherwise provided in subsection (b) of this Section, all public records made or received by, or under the authority of, or coming into the custody, control or possession of any officer or agency shall not be mutilated, destroyed, transferred, removed or otherwise damaged or disposed of, in whole or in part, except as provided by law. Any person who knowingly, without lawful authority and with the intent to defraud any party, public officer, or entity, alters, destroys, defaces, removes, or conceals any public record commits a Class 4 felony.

An argument could be made that complete, repeated, and willful non-compliance with the FOIA is “without lawful authority” and intended to defraud the party requesting the information from access to the information, and through their noncompliance have, in fact, “concealed” those requested public records – which if proven in Court is a Class 4 Felony. Felony convictions committed in the course of performance of their duty results in ouster from office and forfeiture of IMRF retirement benefits. The Official Misconduct statute might come into play also, as they appear to be knowingly and willfully failing to perform a mandatory duty.