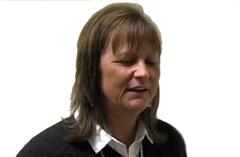 The Edgar County Watchdogs thanks Edgar County 911 Director Nannette Crippes, as she is one of the primary reasons this organization started back in 2011.  Once again she proves we can count on her for continued violations of the Freedom of Information Act as the designated FOIA officer for our 911 Board.  Sadly, even after 5+ years of exposure of wrongdoing, those who she answers to, the 911 Board, have done nothing to correct the failures of their only employee.

"For the reasons stated below, the Public Access Bureau concludes that the response by the Edgar County Emergency Telephone System Board (Board) to Mr. Kirk Allen's September 30, 2016, request Violated the requirements of FOIA."

I sought records pertaining to certain communications related to a potential domestic battery case involving a relative to the dispatcher, an Edgar County Corrections Officers.  That corrections officer has since been charged and we wrote about it in this article.  Proof that our request was in fact tied to a public interest as it is no secret this county has a very problematic history when it comes to corrections officers.

Director Crippes denied this Freedom of Information Request for those records, to include pointing out she deserves a vacation as a justification for not complying as outlined by law.

"I am entitled to vacation days per my contract and we do the best we can with this situation."  (See PAC further review document)

Her response confirms yet another failure. This one of the 911 Board who has appointed this failure as the FOIA officer and provided a stipend of $1,500.00 a year, all while not ensuring a backup is in place to ensure compliance with the law. Using multiple PAC opinions as confirmation of the FOIA officers failure to comply, we can only wonder why they continue to provide additional pay to this person, let alone keep her under their employ.

More importantly, the current AG PAC ruling has exposed an orchestrated plan to avoid the release of public records by Sheriff Wood and Director Crippes.  A plan that was put in place after a prior violation confirmed by the AG PAC office in 2013.  This plan was put in play the first day her cousin took office as Sheriff.  You can see that document here.    How interesting to find the 2013 failures of compliance match almost perfectly to yesterday's ruling, which points to a total disregard for the direction provided by the Attorney Generals PAC office.

Of special interest to this recent rulings is the fact the PAC declared that such an agreement is not valid, as in the agreement Director Crippes entered into with her cousin, the Edgar County Sheriff.

"A public body cannot create laws to avoid disclosing public records to the public or otherwise absolve their obligation to comply with the requirements of FOIA."

"The confidentiality clause contained in this agreement is void as against public policy to the extent that it conflicts with the text and purpose of the Open Records Act. A public entity may not enter into enforceable promises of confidentiality regarding public records".

"Thus, the December 1, 2014, agreement between the Board and the Sheriffs Department does not supersede the disclosure requirements of FOIA. Because the Board's efforts to locate records did not include searching for recordings in its possession of the Sheriff's Department's phone lines and radio channel, this office concludes that the Board violated FOIA by failing to conduct an adequate search for the records Mr. Allen requested."

"In accordance with the conclusion expressed above, this office requests that the Boards search for and disclose to Mr. Allen copies of any non-exempt responsive records maintained on the shared recorder."

What we have here, based on the history of prior FOIA violations, is a willful disregard for the direction provided from the AG PAC office over the years and a disregard for the rule of law.  We now await the records requested almost 6 months ago. The PAC opinion can be viewed/downloaded below.

None of this is surprising to the residents of Edgar County who have seen their public officials operate outside the law and with immunity to the prosecution of the laws. Thus, Edgar County is the home and founding county of the "Edgar County Watchdogs", now a nationally known organization that is helping people all over the state in the exposure of malfeasance by public officials. Thank you again Nanette Crippes.