Yesterday we were informed the Mayor of LaHarpe, Illinois, Ryan Kienast, had directed a city worker to bring the city backhoe down to Kienast’s home and dig away the dirt from a corner of his building foundation.

This was so Kienast could rebuild the foundation of his house that was failing. 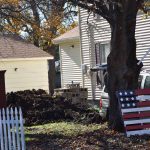 A JULIE location for underground utilities was conducted prior to the dig and stacks of concrete blocks were in place to begin the work once the city operator and backhoe had dug the hole.

You can see the dirt and blocks in the picture.

When we called Kienast and asked him if it was true that the city’s equipment and personnel had been used to dig this hole on his personal property, he replied that “they weren’t doing anything that they normally won’t do“.

When asked again to clarify that the city worker and city backhoe were, in fact, working on the Mayor’s private property, Mayor Kienast hung up the phone without any response.

From all appearances, and the words and actions of the Mayor when questioned, this work was performed and he reaped a direct personal benefit from this misuse of public property.

Constitutional violations of Article VIII, Section 1, can be used as a predicate for felony criminal charges (remember Pekin, IL,?). This Section states that public funds, property, or credit shall be used only for public purposes. This was not a public purpose, but a private purpose for the Mayor.

Violations of Section 33-3 (Official Misconduct) of the Illinois Criminal Code are felonies and result in removal from office. Mayor Kienast appears to have committed Official Misconduct in using public property (backhoe) and funds (wages for employee) to perform work on his private property for his own personal gain.

So, in addition to trying to skate without paying his water bills to the city, he thinks it’s OK to use city equipment and workers to do jobs on his private property.

He needs to resign.