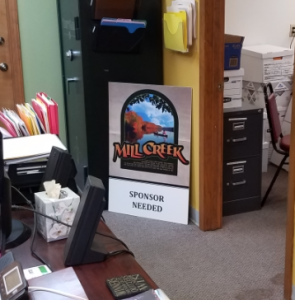 During the September 19, 2016 Clark County Park District regular board meeting, it was discovered by Commissioner Turpin that they were approving an expense to the Marshall Chamber of Commerce in the amount of $5,000.00 for the Wall Dog Project. Mr. Turpin questioned whether this item was approved prior to the expense. The Executive Director, Charity Murphy, replied that it had been budgeted and had been “discussed” in prior meetings. Commissioner Turpin pointed out that just because it was budgeted does not mean the expense was approved. Commissioners Kuehnel and Ewing concurred that the “discussion” happened around April 2016 or later. When Commissioner Turpin further questioned the Executive Director on the commitment form for the project (which he personally was aware of as he has property which was solicited for a Wall Dog mural), she replied she did not sign such form.

This is where the term “trust, but verify” comes into play. I have, since this meeting, fact checked the statements made in this meeting. Just imagine what I found. There are no minutes nor director’s reports which mention anything about the Wall Dog project let alone spending $5,000.00 for the project. Shocking right?! I went back to the middle of 2015 just to make sure that Commissioners Ewing and Kuehnel were not just mistaken on the dates of the discussion. Please note that, if it is not in the minutes, it did not happen.

During my fact finding mission which included a visit to the Clark County Park District Office I discovered the following sign just sitting there, waiting to be seen by a truth seeker such as myself.

It appears someone committed to the project, tried to get a sponsor, failed, and then stuck the residents with the bill. This someone committed to the project, without apparent authority. In my opinion, the Clark County Park District Board of Commissioners should get to the bottom of who authorized the project and do what is necessary to hold that person accountable for unauthorized expenditure of public funds under the Illinois Park District Code 70 ILCS 1205/4-6 which states:

“No member of the board of any park district, nor any person, whether in the employ of said board or otherwise, shall have power to create any debt, obligation, claim or liability, for or on account of said park district, or the monies or property of the same, except with express authority of said board conferred at a meeting thereof and duly recorded in a record of its proceedings.”

Someone had to instruct the Marshall Chamber of Commerce to bill the Clark County Park District for the mural as evidenced below. This is a copy of the invoice presented to the board to pay on September 15, 2016.

The board did vote to pay this although they should not have, as it is an expense made in violation of Park District Code. However, they paid it on the false statements provided by the Executive Director and Commissioners Kuehnel and Ewing. Someone must be held responsible for this negligence or it will continue to happen again and again.