B & J’s Restaurant: Customer Complained About Cockroaches, Got Banned From Restaurant –

According to a customer of B & J’s restaurant (aka “The Track Shack” as it is also known due to its proximity to the railroad tracks), he complained to the Edgar County Health Department about seeing cockroaches while eating in B &J’s Restaurant. The Health Department performed an inspection and noted the refrigerator was not keeping food cold enough and chose not to continue with their inspection at that point.

The restaurant closed until that problem was fixed.

He complained a second time to the Health Department about cockroaches after observing them in a subsequent visit to drink some coffee, and the health department arrived to perform another inspection.

During this inspection, the owner decided to take the food away from the customer’s (Rob Bogue) 3-year-old grand daughter, who had not finished eating yet, and ordered Rob to leave the premises. Other customers were in there, and they were allowed to stay, so we can assume he knew who filed the second complaint.

But, it did not stop there…

The owner decided to place a letter in the local newspaper after the first inspection that basically stated the Health Department did not know anything about operating a restaurant, they just showed up with a thermometer and book – which, incidentally, is a major part of operating a food establishment (keeping food at the proper temperature).

The Health Department did the job it was supposed to do, in our opinion.

Food not kept at the proper temperature can be a health hazard.

He also placed a poorly written and misspelled letter by the door telling everyone that “Attendtion” . . .  “No service to ‘Robet’ Bogue” in B & J’s.

The bottom line of this story is that if you complain about food safety and cockroaches in B & J’s Restaurant in Paris, Illinois, be prepared to have your name on the wall telling every customer that you are not allowed to be served there again – without any explanation as to why you are not allowed in there again.

Other customers deserve to know why Rob was banned so that they don’t dare complain to the Edgar County Health Department about cockroaches in B & J’s Restaurant at 256 N. Main St. in Paris, IL 61944, phone number  (217) 465-9006,  for fear of being banned and humiliated in a similar way.

Our next article will discuss those complaints, and the Health Department’s inspection results will be provided to our readers so they can formulate their own opinions.

We tried contacting the owner for a statement, by calling the restaurant and leaving a message with an employee, but did not hear back at publication time. 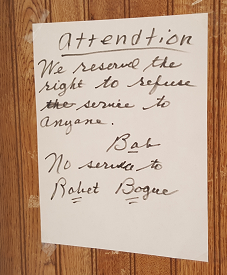 He Complained About Cockroaches